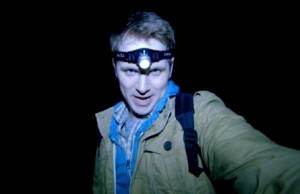 Having patience with a television series can pay off greatly. Once you start edging toward the finish line of its debut season, the stakes begin to heighten and all the (seemingly) unimportant episodes earlier in the run suddenly become valuable building blocks. Granted, not every series has found itself by this point, but for those that have, crashing everything together and bringing out the drama can be a pretty nice reward for fans. It’s tempting to write something off earlier and earlier, considering the sheer volume of entertainment at our fingertips, so it’s cases like Grimm, for instance, that make the argument that sometimes its okay to let a series figure it out.

“Big Feet” was a noticeable rebound from last week’s episode and set up what could be a reveal-heavy finale that lays all the cards on the table. It laid the groundwork, in particular, for both Hank and Juliette to find out about Nick’s other life, or at least the existence of creatures. There have been times earlier in the season where it felt like they were never going to be informed of Nick’s Grimm life, that thread just twisting in the wind for all to see, but all that slow burn was worth the price of admission to “Big Feet”. Grimm can feel a little too insular at times, Nick’s secret not being able to be shared with a good chunk of the supporting cast, so bringing at least one, if not both, of his confidantes will open things up that much more. There’s a disconnect between Hank and the rest of the show that could be remedied by being at least slightly clued in to what everybody already knows (or thinks); Hank has already encountered a few Grimm-like things, particularly his arc with Adalind and the villain from last week, but he’s never made the connection that there’s something not quite right here until he saw Dr. Blinkerhoff retracted in front of him. Considering that he thinks in the same practical, analytical way that Juliette does, maybe Hank needs to have the type of empirical data that she found tonight to further convince himself that creatures do exist.

For Grimm to continue growing, it needs to have the freedom that Hank/Juliette knowing could provide. They wouldn’t have to be super involved; in fact, it could make the police station scenes more fun with all these people in the know and nobody sharing what they know with anybody else. It would allow Nick to explore more of his feelings about being a Grimm while taking a lot of pressure off of Monroe through having different weapons at his disposal. I just don’t know how much longer the show can keep dancing around the issue and hope that the finale will reveal something, anything to one or the both of them.

The only thing that I didn’t like, though, was the opening sequence, typically one of the stronger scenes in your average Grimm episode. It tends to be packed with action, a good jumping off point for an episode as 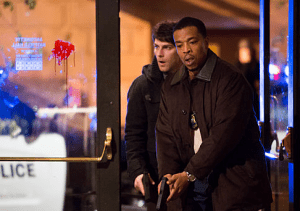 either a crime is showcased or the stage is set for a denser type of episode. The content of the intro wasn’t bad, but the way that it was presented felt very, very dry, with the now-cliche “found footage” trope being trotted out one more time. Grimm does such a good job dressing up older stories and known ideas that it was disappointing to see them present the found footage straightforward; it could have greatly benefited from having some type of twist to differentiate it from the hundreds of similarly gimmicky horror movies (and television show) out there. It felt like the show chose to lean back ever so slightly, rather than actively and creatively making an attempt to find new angles to open up “Big Feet”. And the witness that came from the crime, Vera, pretty much disappeared after breaking down once the cops found her, so its impact had pretty much evaporated a few episodes in. Of course, the crime committed in the intro had more lasting power, sending Nick and Monroe barreling toward shady Dr. Blinkerhoff, but I would have liked for Vera to play a more active role in the investigation. Perhaps through her account of what happened?

Though I didn’t care for the intro, I really enjoyed Dr. Blinkerhoff running wild in the city and the effect that it had over the rest of the episode. The action and violence of Grimm tends to appear to the average townsperson as normal and expected, but what happens when something pops up that you can’t explain? What happens when you’re confronted by that violence rather than viewing it through a third-party source? It’s very similar to the journey that Juliette has taken this season, only the people in town could explain away what looked like a rabid half-man, half-animal wreaking havoc on Portland. Juliette couldn’t due to having empirical evidence that what she had encountered was something unlike anything she had encountered before. “Big Feet” highlighted the divide between the human world and the Wesen world in bright yellow highlighter during the ending news report, a report that didn’t take into account the lack of a mask being found at the crime scene. Your mind doesn’t want to go to all these fantastical places when something bad happens because you don’t encounter Wesen on a daily basis; the upon-death-retraction has been one of the best things for them, in that if they die committing a crime/running from the police, there’s merely a human body there. And considering how order is often valued by law enforcement over the truth, there’s no way they’re going to go “there” in terms of trying to explain the crime.

“Big Feet” may not have addressed impending war or reapers, but it was an important episode in the overall arc of Grimm. This was the episode where it all started coming together for Juliette and Hank and where Portland got a taste of Wesen life – the boundary between the human and Wesen world has often been volatile and while it still very much exists, there’s not a whole lot separating the two vastly different societies. It was an episode that brought a little pathos through Monroe’s kinship (and personal relationship) with the victims of the doctor’s experiments, notable for the fact that humans weren’t the only victims here. Wesen like Alan, Dan, and Larry are just as much victims as the two campers, as they had their greatest weakness exploited by someone that didn’t have their best interests in mind. Despite all the powers and abilities in the world, the Wesen have one foot still in the human world, after all; too bad the ugliness and self-hatred that goes along with that failed to be stamped out.

Thoughts, Quotes, & Observations:
-“These murders were committed by a barefoot man carrying a wolf.”
-“I may have Big Foot on my couch.”
-“You can only walk in darkness for so long.”
-“What’s the best way to get a friend to quit drinking? Tear his arms off.”
-Monroe reading “The Decline and Fall of the Roman Empire” was kind of perfect, no?
-The shoe with the foot still in it was awesome(ly gross) and very Grimm.
-Am I the only person that hopes for a season two episode featuring Monroe’s support group?
-My notes on Larry ripping the drug thing out of his body:”OMG – is he ripping his neck off? What the hell?”
-Cool camera work: panning out of the hole that Dan Murray created in the wall while his brother was on the phone.
-Where’s the medical examiner? We’ve not seen her in a few episodes.
-I loved the lighting in the theater that the doctor took his hostage to. Very menacing.
-Next week on Grimm: The gold coins from “Three Coins in a Fuchsbau” reappear, a mysterious woman in black keeps interrupting the investigation, and Nick’s secret may not be secret for long. 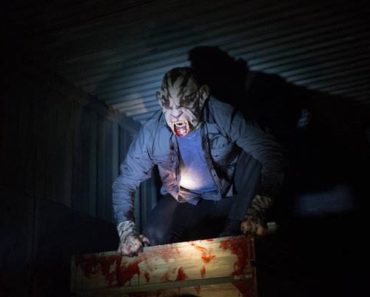 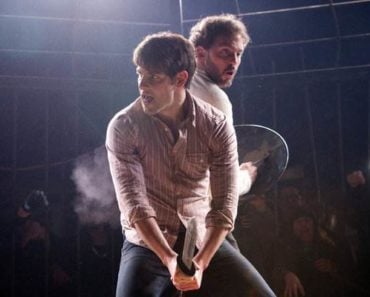 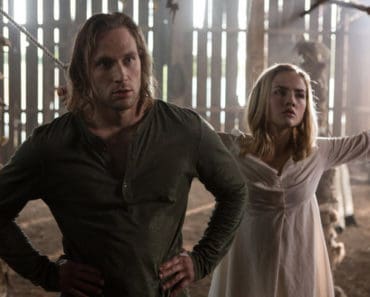 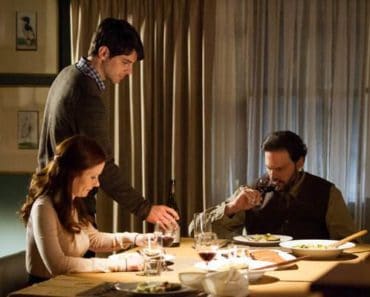 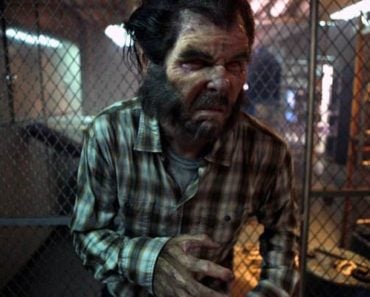 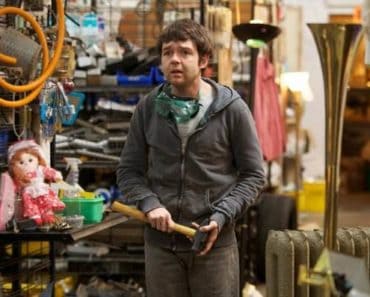