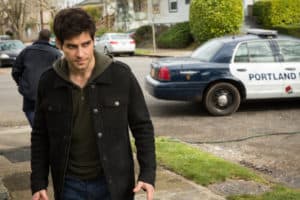 Wu and another officer arrive at a crime scene of what they think is a domestic disturbance gone wrong. They get into the ransacked home where they find a body in the living room and the attacker in the kitchen. He goes after Wu, only for the other officer to put him down with four shots to the chest; however, aside from the blood, they see a bright green slime coming out of the man’s nose.

The body in the living room was already dead, but there’s no evident cause of death or signs of struggle, meaning that they’ll have to wait for the autopsy from the medical examiner before the details/motive of the case get filled in. Outside the crime scene, Nick notices a man in a brown top hat and tan coat humming and singing to himself, though he just brushes it off considering how much he has to do regarding the case in front of him.

The victim turns out to be Lilly O’Hara, a habitual offender brought in for solicitation and drugs seven weeks before her death, while the perpetrator is Richard Mulpus, a minor criminal with no violence on his record. What is on his record is a death certificate, filed three days ago with a prints match. The medical examiner notes that the toxicology tests didn’t pick up any usual suspects (i.e. illicit drugs) in Mulpus’ system and chalks up the confusion to a clerical error and a case of mistaken identity.

Nick and Hank go to the hospital where the certificate was completed and talk to the doctor, who doesn’t remember Richard’s face or specific case. He directs them to the morgue, where it turns out the body is no longer present. On the way to the morgue, Nick sees the man in the top hat again, but unable to stop, he has to brush it off. Meanwhile, at the station, the medical examiner is set to begin Lilly’s autopsy, but right before the first incision, she wakes up with red eyes.

Lilly is then transferred to St. Joe’s ICU, where she’s quickly taken by the man in the top hat. Nick and Hank review the security tapes and find out that something did end up showing in the tox reports – datura, known to facilitate Lazarus Syndrome and whose victims are known to exhibit erratic and explosive behavior. While Portland PD is busy putting the pieces together, the man in the top hat has boarded a bus thanks to “car problems” and spits a green liquid on the entirety of its residents. What type of Wesen could he be?

A Cracher-Mortel, a pufferfish-like known for its death trance-inducing green saliva. He brings his latest victims to a nearby storage unit and locks them inside, insisting that their time is coming. Nick and Hank then bring the information on the Wesen to Renard, who gets frustrated that they don’t have an ID and feels like they’re missing something about his motive.

I Need to Know
Juliette and Nick are slowly getting back on good terms after everything they went through recently. They agree that while they want to go about this very deliberately, they don’t want to go too fast and agree to have dinner the following night.

Juliette goes to Monroe’s home the next day and asks him about the night she went into a coma. She’s able to remember everything else about that night except for what he was supposed to show her, leaving the Blutbad and Bud, over to work on the fridge, flustered. Monroe, however, decides that he’s tired of lying to Juliette and takes her and Bud down to the shop with Rosalee, where the Fuchsbau woges in front of Juliette for the first time. Bud follows, warming the vet up to the idea of Monroe as a Blutbad, and the trio try their best to make sure she understands what they’re doing, that they’re still themselves when they woge, and that Nick’s not a Wesen. Although she tries to run outside at first, she seems fairly calm about the situation and everyone then decides to get a drink to take the edge off.

Later, Bud, Rosalee, and Monroe tell Nick about what happened with Juliette and he takes it well when they mention how she wanted to know. He then goes to Juliette’s and they get to have the dinner together they were denied recently.

The Right Price
Adalind meets with Stefania where the gypsy brings out a contract that will help the former Hexenbiest get her powers back. Written in Vlax Romani, Adalind can’t understand anything and refuses to sign – that is, until Stefania physically forces her hand onto the paper of the binding agreements and gets the signature she needs. Frau Pech overhears the conversation between the two and at dinner with Adalind, she warns her not to trust Stefania and that restoration of her powers won’t be easy. Pech tells Adalind that if anyone finds out about the royal blood the Hexenbiest is carrying, she might be worth more dead than alive and to keep the information as close to the vest as she can.

Adalind feels as if Pech threatened her and goes to Stefania noticeably worried. Stefania promises to talk to her; Pech, though, is busy making moves on her own, going to one of Eric’s men with knowledge of there being a royal child in gestation. She demands an audience with the prince and threatens to sell the baby to the highest bidder if she’s not allowed to see him. The man calls Renard with the news and as he finds passports with no photos and death certificates in the prince’s desk, Eric shows up in Portland a short time later. He’s obviously planning a move since he wouldn’t make the trip to the states without family approval.

While Adalind inspects her stomach in the mirror, Eric has a visitor in his Portland room – the man in the top hat.

Additional thoughts and observations:
-Since the last time we gathered, Grimm has been scheduled for next season and…it’s not going anywhere. It’s staying put on Fridays at 9:00, which I think is the best move for it. To help matters, though, it’ll be paired with Dracula, starring Jonathan Rhys Meyers. Grimm has yet to have a meaningful scripted companion and I think that it and Dracula can feed off of one another and strengthen Fridays.
-Although the scene where Rosalee, Bud, and Monroe woge in front of Juliette was very strong and nicely balanced the comedy with the genre elements (Bud was especially great), that really should have happened earlier in the show.
-Next week on Grimm: It’s the season finale and Nick is called in to investigate a flurry of rage-fueled assaults happening all over Portland. Meanwhile, Captain Renard’s brother Eric is in town and Stefanie continues to use Adalind in her feud with Frau Pech. 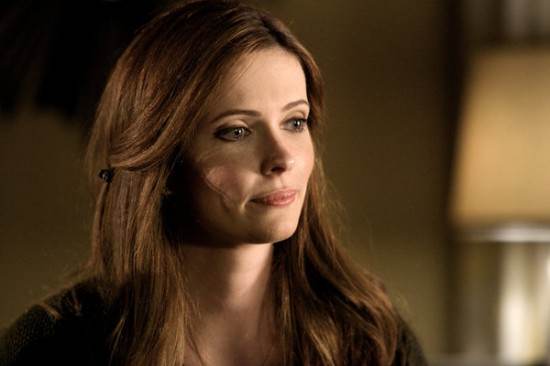 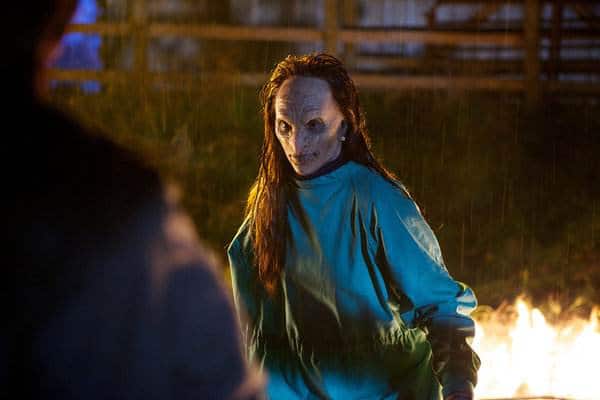 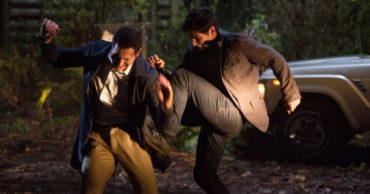 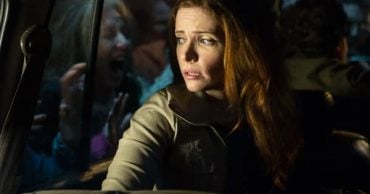 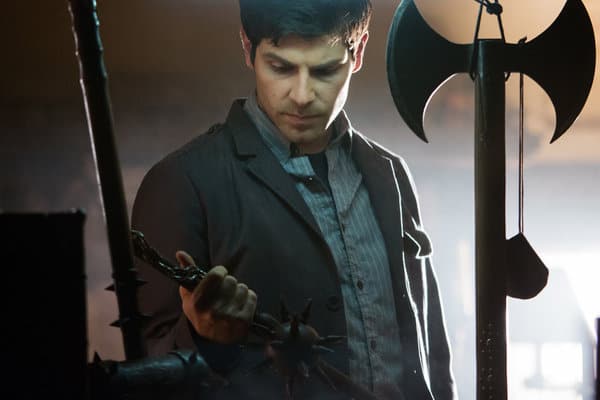 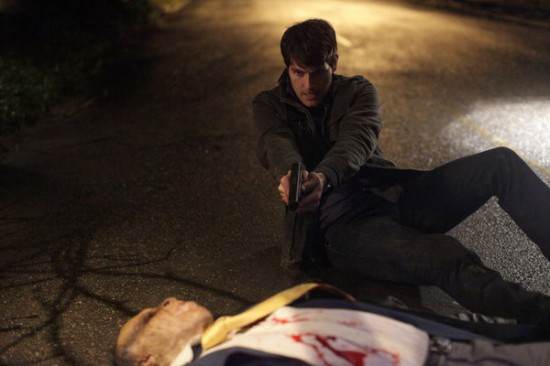