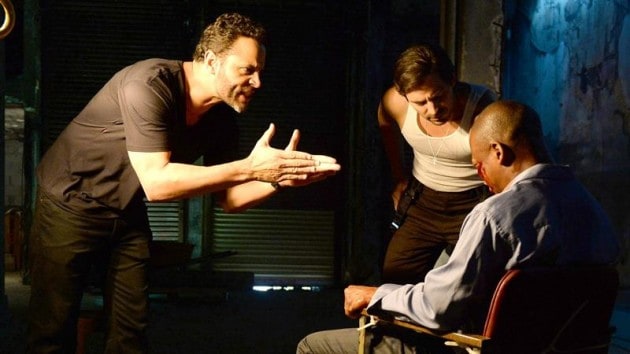 Oh, Graceland, sometimes you act like an inconsistent boyfriend, who, one week, makes one smile, and then cancels dinner without reasonable explanations the next. This time around, it’s an off-ish week.

Following the twist from the previous episode, Sean Logan, who was kidnapped by Briggs and Ari, is bound to a chair, covered in his own blood and sweat. Ari wants to end things quickly, make the man talk, put a bullet in his head, and call it a day. However, Paul claims to want to take his time with the FBI suit. Thankfully for Logan, Ari listens to the Gracelander.

In the meantime, Mike, who has been trying to get a hold of Briggs, makes Johnny and Paige privy of what he knows. Though, initially, neither want to believe that Briggs has gone rogue, the facts, as stated by Mike, do make sense, and as it appears that the time to call the Bureau is due, Paul walks in announcing that he has Logan. He plays a recording where he and the agent discuss that the kidnapping followed by torture is the best way to get the Sarkissian mob, which is enough evidence to convince Miss DEA and Johnny. Mike, on the other hand, says that he heard Briggs telling Ari Logan’s license plate number, but his word is disregarded since he was experiencing withdrawal symptoms when he heard the phone conversation where the plate number was discussed.

With Briggs having convinced 66.66% of the team and Mike having no choice but to follow suit, Paige is all set to play her part, and she gets ready to meet Toros, which leads to the return of “The Lady in White,” an exciting event that felt unnerving considering that the first time around, the white dress ended up bloody. With Paige ready, Mike, Johnny, and Briggs device a plan to get Tevan at Toro’s initiation ceremony.

In the meantime, Charlie has decided to resurrect Germaine’s takedown, and, in the middle of the night, enlisted the always reliable and hilarious Dale. The plan is to circumvent the ATF by getting Dale to be Germaine’s buffer. Though he was cranky when Charlie gave the specifics on the mission, Jakes agrees to help. Later on, the two share another meaningful moment in the car, while briefly discussing Charlie losing her pregnancy.  It has became impossible not to love these two and their shared scenes; at the same time, it is a good call on behalf of the writers to keep Charlie motivated to get the man that, albeit indirectly, caused her to miscarry.

Back on the Sarkissian end, Paige meet with Toros and successfully convinces him that she wants him. It’s a little forced and hard to buy since Paige had brushed him off before, and the guy seems to have left his gut feeling at home. However, I chose to believe that the Lady in White is just THAT effective, and boys will be boys.

In parallel, Mike and Johnny watch Paige work her magic, an act that has Mike even more suspicious of Briggs. Agent Blue Eyes questions the fact that two agents are necessary to monitor Toros, which is an excellent point, not to mention that Toros is with Paige, a lethal weapon herself. Mike’s theory is that Briggs wants him and Johnny Boy looking at Toro only to deflect the attention, and carry on with whatever nefarious plans he has in store for Logan. Johnny believes that Mike has a point, so the two decide to reduce the surveillance on Paige and Toros from two to NONE, and here is where it gets a little bit ridiculous for three reasons. First, all of them there was too much, but if Tevan was to make an appearance, Paige alone couldn’t take him and Toros, so for Mike and Johnny to leave would be reckless. Second, they call a TAC team to head to where Briggs has Logan, but no one to watch out for Paige? And lastly, they don’t let Miss DEA know that she has no back up? It is really hard to accept the way the boys thought things through.

While Mike, Johnny, and the team they called rush to help Logan, the man is being tortured by Paul and Ari, until he finally decides to burn Paige, which prompts Ari to decide to call Tevan and warn him, and Briggs to shoot Logan. Ari leaves to crash Toros’s initiation and is trailed by Johnny, while Mikey and company surprise Briggs, only to realize that Logan is alive and was just being a good sport. In another layer of ridiculousness, Mike looks like a fool, even though his reasoning was on point, except for, you know, leaving Paige vulnerable, unarmed (as far as he knows), and in an attire that would lessen her fighting abilities. But hey, she almost had him killed… Briggs is upset because Mike didn’t blindly listen to him, when, in reality, his own behavior was questionable. And here is where, in my opinion, the plot falls apart, for a very simple reason: Why couldn’t Briggs tell Paige, Johnny, and Mike about his plan? There was no risk involved if they had known, none whatsoever. I get that the episode needed the twist, and high stakes, and that the dynamic of Mike questioning Paul asks to be restored, but it doesn’t work when it ‘s not justified that Briggs would decide to lie and put people in danger.

In a mission where incomprehensible strategy is not involved, Dale has agreed to work for Germaine, which involves tearing down walls of houses in order to retrieve money hidden within the structure, counting the cash, storing it in suitcases, and then having the suitcases in planes with passengers that do not look suspicious. Not only it is clever (although the briefcases do look a little fishy), but the fact that Charlie and Dales are making progress, and without shedding blood, keeping secrets, and taking unnecessary risks, is refreshing.

Paige, on her end, strengthens her bond with Toros, who, possibly blinded by her beauty and the magical white dress, opens up to her about his childhood, all of this, while she shaves his forearms to get him ready for his new tattoos. I must admit, mushy Toros was interesting to see, while having Paige holding a blade was a relief. A little blunt of a hint, but I’ll take it.

Right before the ceremony, Paul calls Paige and lets her know that she has been burned, which, once again, why not let her in from the get go? Miss DEA tells Toros that she needs to go to the restroom, uses the blade to cut through the window screen, and runs away, probably wondering why she was not warned to wear something different, and where on earth Mike and Johnny were. Thankfully, she makes it to Graceland, but Toros intercepts her. He gets into the house, and Paige is quick on her feet by giving him an excuse as to why she ran. Her words about not being part of the family make sense and show, once again, why Paige is good at what she does. The problem is that she literally jumped out a bathroom window; she could have just told Toros and then left. It doesn’t matter, though. Toros is enraged and starts to strangle her, which results in Paige retrieving the blade from her purse and cutting his throat. When the FBI Gracelanders make it home, they find that, yet again, the Lady in White is splattered in red.

“Hand of Glory” had interesting elements, but I question the way they were glued together. Paul’s plan was a failure, because this time around, deceit was never going to work in his favor, and I cannot stress enough that it made no sense other than for shock purposes. To that I’d add that I am still wondering why no one is concerned about the sarin gas. The best part of the episode, however, was Charlie and Dales’s mission, while the Lady in White was a nice touch, and a functional Mike is a welcomed Mike, always.

Nearing the end of the season, I am confident that this was a hiccup and that Graceland will bounce back. The Sarkissian storyline still has enough steam, while Germaine’s case has all the promise in the world to deliver.