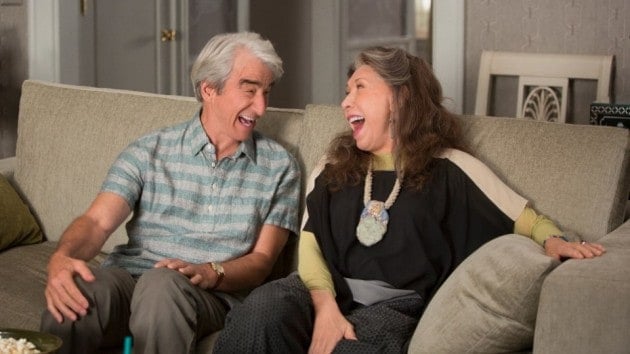 Grace and Frankie has really been on a hot streak of episodes lately that have justified its entry into Netflix’s growing roster of original programming. “The Spelling Bee”is a solid episode that doesn’t have to rely on just character progression, now that a lot of that necessity has gotten out of the way.

The episode opens up with Frankie watching a televised spelling bee while Grace walks in after a disastrous date. While Grace isn’t interested in watching the spelling bee with Frankie, Sol is facing the same issue with Robert across town. While both of the former spouses are forced to watch their first spelling bee without the others, Brianna is having poor luck while preparing for a date, causing her to call Bud over for help. Unfortunately, Brianna’s date cancels on her, and it is up to Bud to comfort her.

Frankie wants to get on Twitter so that she can interact with other viewers of the spelling bee, and she gets Grace’s help in setting up her new laptop. Frankie’s struggles are too much for Grace, though, so she’s forced to call a help line for tech support. The line puts her through to someone that specializes with older people, but she ends up talking to the man more about her life than the computer. In the end, he ends up helping her send her first tweet. Sol shows up at the house to ask Frankie to come over and watch the spelling bee with him, but she thinks it would be too weird and refuses.

Giving up on dating, Brianna decides to adopt a dog. She invites over a foster parent, but he ends up being more handsome than she expected. Once she’s left along with the dog, she realizes that she is maybe in over her head. Back at the beach house, Frankie is tweeting along with the spelling bee since Grace insists on going on her date. While waiting on her date (who is running late), Grace runs into Robert’s old friend Guy, played by the incomparable Craig T. Nelson, who is moving back to town. The pair end up talking, and they escape to go have ice cream together.

Later on, Frankie reveals how big of a fan she is of Guy after she catches Grace reading one of his books. Grace heads out on her date with Guy, and Frankie finally gives in and goes to watch the spelling bee with Sol. Robert gets home, however, and Frankie heads back to the beach house because of the awkwardness. Robert and Sol end up getting into an argument about keeping secrets, but they realize that Grace and Frankie will always be big parts of their lives. In the end, the couple ends up watching the spelling bee together.

Brianna, still having trouble with her dog, calls the foster dad back over because she is attracted to him. They end up having a date, as Frankie watches the final round of the spelling bee alone. Grace’s date, meanwhile, is going surprisingly well, while Brianna’s ends poorly, leaving her dog her only company. In the end, Grace and Guy decide to continue a relationship.

It’s really great that we’ve gotten to a point in Grace and Frankie where supporting characters (and the actors who play them) can hold their own, with Brianna having an extremely strong story that had nothing to do with any of the older generation. Grace’s exploration into dating is exciting to see, and it’s nice that we’re still getting tiny bits of character progression even when the series doesn’t have to try and bog itself down with it. Overall, “The Spelling Bee” is a great halfway point of the first season of Grace and Frankie, and I can’t wait to see more.