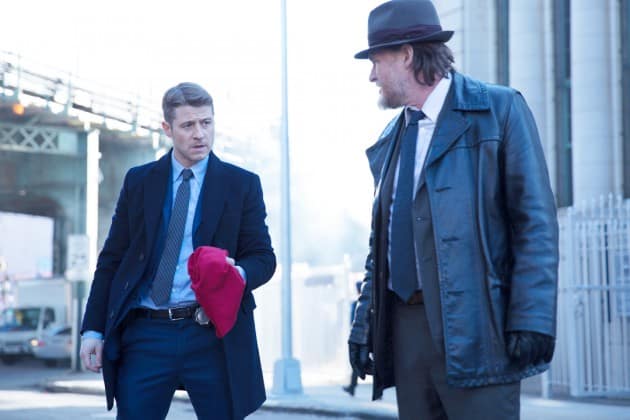 After having had several strong episodes in a row since the show came back from its winter break, this week’s episode of FOX’s Gotham was sadly the first one to stop that streak, at least for now.

Even before this episode aired, I wasn’t sure how to feel about the addition of Red Hood, as I’m always used to either the version of Joker (before he became the clown prince of crime) or the Jason Todd (the second Robin) incarnation. It remains unclear whether this is the beginning of a larger take on the Red Hood mythology or not, as well as if Jerome (who is most likely our future Joker) will be involved at all at some point. The one thing that is clear though is that it was a pretty lackluster A-story for this episode, as the bad guys were poorly written and pretty one-dimensional.

All of that made it really difficult as a viewer to care for them or the story at all, and the one thing that would have least made it a little intriguing would have been if Jerome had showed up at the end and been the one to pick up that hood. In addition, it would have given us another great tease of what that character is now as one of the things that Joker is famous for is breaking out easily from wherever he is. I know they are most likely not going to go with that specific Joker origin, but it would be fun to at least see the potential of Jerome heading in that direction before he meets his destiny. But overall, the whole thing was quite disappointing, and it just felt like a lazy excuse to be able to use the “Red Hood” name and now they have also wasted that episode title.

I was more intrigued with the B-story of “Red Hood,” as Alfred gets a visit from an old friend, Reggie Price, who turns out to be a backstabber as he was hired by the shady folks over at Wayne Enterprises. It can’t be stressed enough how thrilling it is to see the dark arcs that this particular young version of Bruce Wayne is going through. The scene where he got to have a little fight training session with Reggie just kept getting darker and darker with every punch Bruce threw at him. Even though we know the mythology and that the show would never dare to kill this character off, it was still heartbreaking to see Alfred hospitalized after Reggie stabbed him and seeing Bruce terrified of losing the only person in his life. However, the introduction of Reggie gave us another glimpse into what is going on with the Wayne Board.

Being the big comic book fan that I am, seeing the board being corrupt and shady as well as being involved in some form of conspiracy, feels really familiar to me and I feel that I have seen this in some Batman story not so long ago. Fellow comic book enthusiasts, if you know what I’m trying to refer to, hit it off in the comments below.

So in the end, the B-story of the episode ended up being so much better than anything else in “Red Hood,” as we got a little bit more of Alfred’s background. For once, what the Penguin did in this episode wasn’t interesting at all and can someone please explain what the heck is up with Butch? I smell some plot twists coming up and speaking of twists: What the Fish?! I knew she was strong and nuts, but she took it to a whole new level by pulling out one of her own eyes before the bad guys got to.