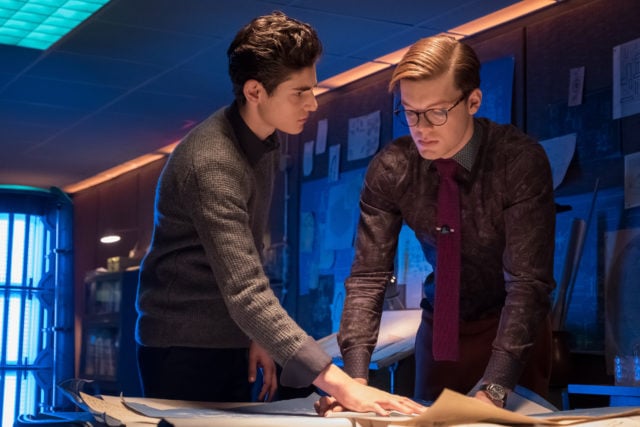 As a general rule, I enjoy Gotham. The insane villains and the relationship between Jim and Harvey make the entire show worth watching. Lately, however, sticking with it has been hard. Most of Season 4 so far has felt like wheel spinning, with the occasional episode that says “hey, the show you love is still in here”. I don’t know if they’ve just run out of ideas, or they’re just trying to bide their time until Bruce is really old enough to be Batman, but “That Old Corpse” feels like they’re running in place for most of the episode.

The real problem with this story is that it doesn’t add anything new to the table. When they killed Jerome Valeska and revealed that his brother, Jeremiah, was arguably more unhinged, they played their entire hand. Now, all these episodes are establishing is that Jeremiah is also a crazy person who wants to outdo his brother instead of run from the legacy. The issue I have with it is that it feels like they could have done this quickly and more effectively, but this entire episode felt like they were just dragging it out. We all know that Jeremiah is the Joker and that Cameron Monaghan can play him, so why are we still doing this? Just finish the transformation and deal with the consequences.

The other issue is that the stakes aren’t high enough, because most of these characters won’t die before the Batman era of Gotham City. Gotham, of course, can be treated like its own iteration of comic material like it has been in the past (see Maroni and Falcone), but Jim and Bruce don’t feel like they’re in any real danger, so there’s less of an effect when creating this Joker, or establishing Ra’s Al Ghul. At the end of the day, we know that the show is about Gordon and Bruce, and until they reach their familiar commissioner and vigilante bat status, there isn’t any present danger.

I’m getting a little off track talking the state of Gotham as a whole, but I can think of a few positives of this episode. For one, Cameron Monaghan is an overall excellent addition to the cast. I’m not loving the story arc for Jeremiah versus Jerome, but you can’t deny that Monaghan was born for this role. Both Jerome and Jeremiah are wonderful characters for him. I also very much appreciate that Penguin and Butch are back together, even though its out of necessity for the characters. It makes me feel like the old Gotham I love is not lost.

Overall, there were some positive takeaways from this episode, but the Joker story as a plot just isn’t doing it for me.

Jeremiah breaks bad in the wake of his brother’s death, while crime in Gotham rapidly increases on this week’s mediocre episode of Gotham