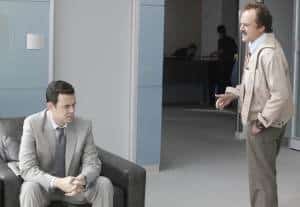 This week, it’s Jack and Dan versus Satan.

Okay, not really, but in this episode they do take on a corrupt senator played by Ray Wise, who also played the Devil in The CW’s short-lived Reaper.

Lieutenant Ruiz assign the two of them the “Tech Bandit” case, what Jack calls “one of the top thieves of the last decade.” Since Dan is more or less technologically inept, he’s not particularly impressed – nor does he like the next part, where Ruiz tells them that a forensics expert from Houston has been brought in to take the case (complete with some film school student shooting a documentary about him) and they’ll really just there to help him. “This may be the week that I’m kicked off the force,” Dan says after meeting Dr. Laviolette (Star Trek: Voyager‘s Ethan Phillips). One can’t exactly blame him, as the man proves to be a pompous blowhard when they tour the scene of the Tech Bandit’s latest crime. Jack quickly comes around to Dan’s side, snapping when the doctor tells him to get him coffee.

Meanwhile, Ruiz brings in Liz to help her with a prostitute named Zoe who claims to be involved with State Senator Buddy Haverton (Wise), and that he’s paying her with the money that he’s taking under the table. She was in the limo one week earlier when the Senator was practically blackmailed by a guy working for a company that’s being investigated for dumping toxic waste. Liz is definitely interested, as long as Zoe will testify and wear a wire.

After ditching “Science Boy,” as Dan calls him, Jack and Dan decide to start solving the case on their own. Dan’s eating of evidence at the crime scene (ew) leads them to a barbeque joint – what was in the building wasn’t blood, but a distinctive sauce Dan was able to identify. The barbeque place has a security camera, so their next step is to review the tapes. When they get back, the doctor is sitting at Jack’s desk and Dan flips out (“I’m going to stuff you in that chemistry set and roll you straight to hell”), enjoying showing off the photo they lifted of the Tech Bandit. This means the doctor drags them both to the FBI forensics lab to analyze it. They decide they have better things to do with their time and leave him there – and steal the documentary too. Rewatching the security footage, it doesn’t take them long to identify the Bandit as a local food blogger, who’s helpfully posted his current location in one of his articles. Take that, expensive federal science!

Upon arriving at the hotel, they’re able to name the blogger as Roland (K-Ville‘s Derek Webster) and get his room number from the hotel staff. Yet just as they’re ready to bust the punk, the doctor turns up with a SWAT team to get all the glory for himself. They have nothing to do but discuss the Foghat tape Dan gave Jack, and their mutual love of vinyl records. Making his escape from SWAT, Roland drives right by them and puts them right back on his tail. Another car chase ensues (how does Dan have a driver’s license?) until Roland drives into a brick wall. As they lock him up, he tells them his crime habit supports his food blog. Also, even he hates Laviolette.

Ruiz and Liz’s prostitution sting doesn’t go as planned when Zoe freaks after the Senator gets roughed up at his home, leaving them no choice but to get an undercover cop to complete the deal. It gets worse when Liz finds out that Zoe sent a picture of her to the Senator, telling him that she was the one who’d be coming. Liz gets to get all dolled up and walk directly past Jack in a very obvious hooker outfit that she can’t even bend over in, causing him to become immediately turned on and unable to do a damn thing about it. However, she’s not very good at doing the actual undercover work. When Ruiz goes to arrest him, the Senator pistol-whips her and takes Liz hostage. Needless to say, this does not sit well with Jack.

The boys plot a way to come to the rescue, and get help from a surprising source – Roland. (“You so much as try to run, he’s going to shoot you,” Jack warns. “Which is going to be bad for both of us, because you’re gonna be dead and I’m gonna have to fill out all the paperwork.”) While everyone else watches the scene unfold, they start working on a plan (and Dan admits he slept with Ruiz…twice) but don’t get far in hatching one before gunshots ring out. They end up deciding to sneak through the ventilation shafts, at least before Dan gets his overweight self stuck and Jack falls through the ceiling right into the room where Liz and Ruiz are being held. He’s nearly shot, but arms himself with plenty of silverware and uses that as a weapon until he can recover his gun. It looks as if he’s going to be able to talk the Senator down – until Dan lands on the guy. Ruiz throws silverware at him for that, but at least that gets the situation defused safely.

Back at police headquarters, we learn Roland has escaped (and taken the film guy with him), much to the doctor’s ire. At this point, no one else cares. Ruiz just wants to go and get drunk after the day she’s had, especially when Dan tells her that Jack knows they had sex. “I didn’t show him the tape,” Dan says, and whether he’s joking or not we’ll (hopefully) never know.

The Good Guys remains one of the most off-the-wall, funniest hours on television. Every episode there’s at least a moment or two where I find myself laughing out loud. Not to mention, it’s a show that I can sit down at the end of the week and watch with my family, which is not something you can say about a lot of series anymore. The show remains the perfect way to finish my work week, and I can’t wait until next week. Until then, I’m off to go bust some punks.