Home
Movies
“Glengarry Glen Ross” Turns 30 In 2022: Here’s Why You Should Rewatch It 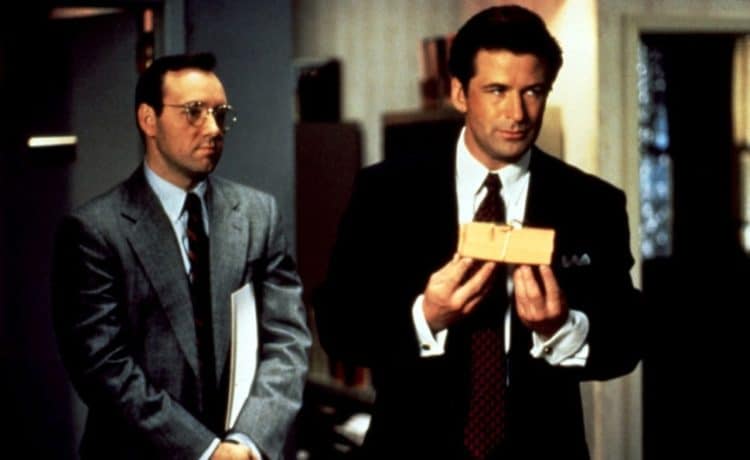 There is no better time than now to revisit the movie Glengarry Glen Ross in 2022. The movie, which premiered in 1992, is celebrating its 30th anniversary this year, marking three decades that the movie has become a permanent fixture of pop culture. The movie explores the cutthroat world of sales and the corporate world. The film stars Al Pacino, Ed Harris, Alan Arkin, and Jack Lemmon and was released in 1992. It is now still relevant today because it shows the problems with society’s obsession with superficiality and greed at all costs. Roger Ebert‘s comments on the movie perfectly described what the film was really about: “Produced onstage in the good times of the 1980s, filmed in the hard times of the 1990s, it shows the new kind of American salesmanship, which is organized around offices and corporations. No longer is a salesman self-employed, going door-to-door. Now individual effort has been replaced by teamwork. The shabby Chicago real estate office, huddled under the L tracks, could be any white-collar organization in which middle-aged men find themselves faced with sudden and possibly permanent unemployment.” With this film being released in 2022, it will be much easier for viewers to show support for this movie by watching it again or even for the first time. If you are intrigued by the idea of rewatching this movie soon, then read on to learn why you should do so in 2022.

Glengarry Glen Ross is a film that follows the fictionalized story of four mediocre salesmen, played by Al Pacino, Ed Harris, Alan Arkin, and Jack Lemmon. The men play workers for a real estate company and their lives are portrayed as being incredibly stressful. The film focuses on the idea of how superficiality, greed, and narcissism in society have caused people to stop caring about each other and just care about themselves. It’s a commentary on how companies focus on creating a facade of success and happiness in order to attract customers through often dubious campaigns. In Glengarry Glen Ross, which is actually an adaptation of a play by David Mamet, these talented actors are able to give life to their characters and bring the true tone from the play to the screen. They portray characters with depth and complexity that feels real; so much so that it could be possible that they are actually real people. You can’t help but feel like you know them. And when you watch this film adaptation on the big screen, you’ll get a whole new perspective on the story behind this classic play. You’ll see all the intricacies of Mamet’s script that might have been hard to catch when watching it at home or in your living room with your family. The cast of Glengarry Glen Ross is one of the most highly skilled casts to ever grace a screen. Every role in this film adaptation is filled with actors who are not only talented but also have incredible chemistry with each other. Most importantly, the acting in this film adaptation exceeds expectations. It captures the true tone of the original work and brings an entirely new world to those who have never seen the play before. The story is also compelling enough that you’ll be invested until the end. The cast’s chemistry with one another has induced so much excitement from audiences that the Guardian even went so far as to write that the movie has one of the best American casts ever assembled.

The legendary “Always be closing” scene

Alec Baldwin’s legendary scene in Glengarry Glen Rose is perhaps what solidified the movie’s status as a pop culture icon. Baldwin played a verbally abusive “motivator” who pushes the four salesmen to fight for their livelihoods. His appearance in the movie was barely seven minutes long, but Baldwin’s electrifying performance in the movie forever attached his name to Glengarry Glen Rose. His monologue on the movie was so perfect that it continues to be referenced in other on-screen works, even on Boss Baby, where Alec Baldwin voiced a domineering, business-minded infant. The AV Club analyzed the scene, writing: “Yet he arguably sets the tone for the entire movie, providing a much more concrete sense of the pressure these salesman are under. Baldwin gives the monologue a marvelously practiced ring, as if he goes around performing it for various seedy offices around town; he’s the motivational speaker from Hell, determined to either increase productivity or inspire suicide.” The Atlantic, in an article celebrating the movie’s 20th anniversary in 2012, wrote: “But hell is still hell. And hell needs a ruler. And for this Blake does not qualify. He’s a one-dimensional blowhard, honest about who and what he is, spewing hackneyed sales slogans beneath a daisy-wheel printed banner that unconvincingly reads “Salesmen are born, not made.” It all whiffs of “the man doth protest too much,” and for any male with even a wisp of self-possession it’s hardly emasculating. For Blake, trampling on these impotent men is more for his benefit than for theirs. He doesn’t hate them. He’s just deathly afraid of becoming them, and his tirade is like a shot of insulin, taken to prevent the unimaginable. No, the Evil One in Glengarry Glen Ross is Ricky Roma, and in a production filled with wonderful roles and actors, it’s Roma and the extraordinary Al Pacino that brings us back again and again.”

Even though Glengarry Glen Ross was released in 1992, it still has the ability to entertain a modern audience. The movie’s themes of despair and desperation are universal, even if they are set in a specific time period. The movie is a great example of how a small idea can turn into a full-fledged film with the right script and the right actors. Glengarry Glen Ross has maintained a legacy that spanned decades. It is a timeless film that has been able to entertain audiences for over three decades. The 30th anniversary of the film will be in 2022. This means that at the time of release, it will have been 30 years since it was released on November 13, 1992. It is now still relevant today because it shows the problems with society’s obsession with superficiality and greed at all costs. With this film gaining attention once more on its 30th anniversary, it will be much easier for viewers to show support for this movie by watching it again or even for the first time.