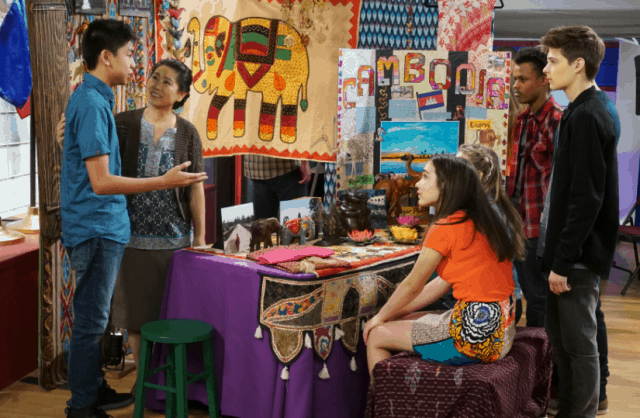 After nearly a month long hiatus, Girl Meets World returned this week with a really powerful subject kids need to pay attention to. For the lucky kids who haven’t had to deal with prejudice or a clear cultural divide in their lives, culture is something that is ignored. Either that or you’ve become so accustomed to the 21st century Americanized culture that you are aware of your past, but it doesn’t play a role in the everyday. Finally we have a story where the opening lesson is clear and succinct: Go out and find your story.

With Culture Week coming up, that’s exactly what Cory encourages the kids to do. Some have a very clear idea of where they came from. One of Riley’s friends hails from Cambodia, and he is close with his grandmother. He knows how his grandmother escaped from Cambodia during the genocide there and had to escape. That’s real, Nigel gets an A. Auggie’s new friend Rafi is of Cuban descent. He enjoys Ropa Vieja and his cousin plays with the Mets. Rafi isn’t even in the class and he gets an A! Riley, Maya, Lucas, and Zay all deserve an I for incomplete. Texas, potatoes, and cream cheese are not culture, not authentic at all. Here’s the point the kids do understand. Cultures clash because we’re all different and sometimes it’s hard, even scary, to understand what’s different. Again, a few adults would do well to understand this point.

To the Internet and the grandmas the kids go! Zay hails from Ghana by way of Jamaica. He takes to heart that he is lucky enough to know which country his family originally came from, as most who can trace their roots back to Africa don’t. Maya’s family is originally from Ireland. After researching the beautiful cultural arts and environment the country has, she makes a commitment to take her mom there one day.  Riley may have the most challenging time of anyone finding her history. Not even in Boy Meets World was the Matthews’ family background discussed farther back than the middle of the 20th century. That’s because Riley is one of the few who can trace her ancestry so far back into American history that there aren’t records. So Riley is the melting pot. Her family is from all over America and has experienced all of the other cultures who came to this country, infusing some of their beliefs and traditions into her own life.

Farkle actually ends up troubled by his story, specifically that there’s a certain gap missing in his family tree. Girl Meets World has always talked around some of the heavier topics, which at times is a little annoying. In this case though, I’m glad they did that. Farkle discovering that his family was wiped out during the Holocaust was extremely painful and personal. Something that heavy needs to be spoken about, but it’s something that needs to be explained in a certain manner. Farkle’s great-grandfather was adopted by a family from Denmark to save him. Hopefully kids latch onto how important that point is and it will spark a conversation between parents and kids about the past.

This may have been one of Girl Meets World‘s most important episodes. Cory makes the kids see that our stories aren’t frivolous, they have impact on who we are and where we’re going. Find your story, because “otherwise we don’t stand a chance.”

Cory assigns the kids to find their heritage in one of the most important episodes of Girl Meets World.