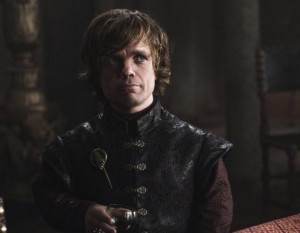 “There’s a king in every corner now,” Catelyn Stark declares in the season 2 premiere of Game of Thrones. That neatly sets up the premise of this coming season, although the war for king is anything but neat.

If I had one complaint about the first season of Game of Thrones, it’s that it took several episodes to really get going. Whether you had read George R.R. Martin’s books or not, the first few episodes of the series spent a great deal of time setting up the rich and complex world of Westeros. There is no grace period in season 2, but none is needed. From the first opening shot after the iconic opening credits, the story progresses. Those of us who watched the first season will be immediately thrust into the next chapter of this epic tale, while those are are just joining in will have a great deal of backstory to catch up on.

Five men are fighting to be king of the Iron Throne, although only one – Joffrey – currently sits upon it. Ensconced in the capital of King’s Landing, and backed by his family’s wealth, Joffrey is a tyrant of a ruler. His innate cruelty is allowed free reign now that he has the crown upon his head. The rest of his family, however, is not as blind as he. His grandfather has sent Tyrion to act as the King’s Hand in his stead and this immediately galls Cersei, who clearly wants to hang onto power but doesn’t have any true understanding of how to do so. Tywin and Tyrion both understand that the death of Ned Stark has caused an uproar, one that the Lannister family cannot afford to get out of control. Since Cersei cannot control Joffrey, Tyrion is attempting to get a handle on the political machinations in the capital.

Further north, the Stark family is waging war against the Lannisters. Distraught after Ned’s death and eager to retrieve Sansa and Arya from the Lannisters, they are also attempting to break the North off into a free territory, with Robb instilled as the king. But Robb is coming to realize the amount of responsibility that he – and his family – must shoulder now that Ned is dead is a heavy burden.

Even further still, Jon Snow, Commander Mormont, and the rest of the Night’s Watch have ventured beyond the Wall in an attempt to quash any potential uprising by the Wildlings. Mance Rayder, a former member of the Watch, is now amassing his own army of Wildlings who are looking to move south, and the Watch must find a way to prevent this from happening.

To the east, we have Daenerys, who is marching her khalasar across a barren dessert. Daenerys may have three dragons, but they are of little use to her right now. Her depleted band of followers is starving and her enemies surround the land she is trying to cross, not allowing her or her people any rest. 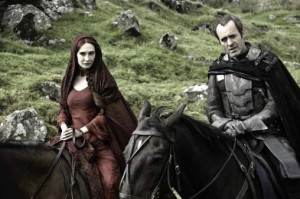 Elsewhere, we have both Stannis and Renly Baratheon, two brothers of the recently deceased King Robert, who both feel they have a claim to the Iron Throne. Stannis has Melisandre, a witch and follower of the King of Light, on his side, while Renly has 100,000 men backing his claim.

My love for Game of Thrones is great, if only for the fact that it has ably created and populated a vast and rich world that we rarely see on television. Tales of morality and power struggles are nothing new, but this show presents them in a way that always feels engaging. The second season’s only real danger is in expanding this vast world even further. New characters are introduced and, as a consequence, some storylines are not always given their due in a single episode. Daenerys, for example, appears quite infrequently in the first two episodes. With so much material to condense into a 10 hour season, it’s nearly impossible to give each character detailed attention. This is not necessarily meant to serve as a complaint, merely an observation. The good news, however, is that every scene that a character does get feels important. There’s no room for filler in this heavily-populated world and the writers don’t bother feeding it to us.

As always, the actors on Game of Thrones bring strength and vulnerability to their characters in equal measure. There is really no member of the cast that isn’t perfect for their role and despite the fact that their characters inhabit a fairly fantastical world, they are all characters that we can relate to. While we’re introduced to new cast members, they’re compelling enough that they feel like they’ve been part of the story from the beginning.

On an aesthetic level, let me say that the Game of Thrones location crew have outdone themselves. As you flit from one location to another, you can see both the authenticity and the differences that are spread throughout Westeros. King’s Landing is full of buildings with light and airy curtains blowing in the wind, while Daenerys’ desert is dry and harsh. Up in the north, we’re treated to a cold and landscape beyond the Wall (filmed in Iceland). You may not be aware of how much green screen technology goes into Game of Thrones (I assure you, it’s a great deal), but everything looks so perfectly rendered and authentic that it’s not difficult to believe that Westeros is a kingdom with locales that aptly represent all of the seasons of the year and different parts of our own world.

Game of Thrones fans who have been waiting for their show to return will not be displeased by the second season. This tale continues to delight, shock and pull us into its world. The only real question is whether one of the men will emerge as the true king by the end of the season, or will the war continue?

Game of Thrones airs tonight at 9:00 p.m. ET/PT on HBO. To catch up on the story so far and be introduced to the new faces of season 2, watch the featurettes below.