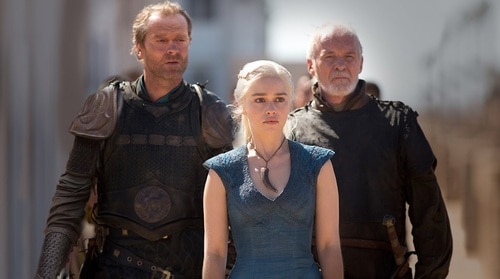 Disclaimer: I have not read the G.R.R. Martin novels. If you wish to comment on these reviews–which I encourage you to do–no spoilers please.

Game of Thrones, much like Robb Stark and his army, requires a patient viewer. This series isn’t centered around individual episodes; the focus is the arc of the season. Sometimes that can be vexing. But where “Walk of Punishment” succeeds is that they throw us some bones: This episode was hilarious! Sure we have the usual grim and cynical events that Westoros is so notorious for which we’ll get to in a minute, but I can’t tell you how ecstatic I am to see Tyrion and Bronn back in the swing of things.

Season one introduced us to this terrific duo and we laughed hysterically at all of the whore jokes. I feel like their relationship was neglected throughout season two and I sincerely lamented that. I understand that Tyrion is concerning himself with more pressing matters than the definition of impregnable, and I should appreciate that Tyrion is finally in a position to put his strategic acumen to work, but I miss these guys!

In “Walk of Punishment”, Tyrion is mockingly appointed as interim Master of Coin and so he and Bronn visit Lord Baelish to inspect the ledgers. Before they take their leave Tyrion pays for his squire to enjoy the company of some of Little Finger’s finest employees and the zingers keep flying: “Jenna specializes in first timers.” “She’s not bad with second timer’s either.”

Tyrion subsequently enlightens Bronn to the concept of lending. We know how this works: One borrows money, and one eventually pays it back. Bronn isn’t so accepting of this however. “What if I don’t?”, he inquires not grasping the simplicity of this logic. “This is why I don’t lend you money”, replies Tyrion. It’s good to have you back gentlemen.

Ok so let’s get to the doom and gloom: Daenerys gave up one of her dragons as if it were a male child of Craster’s! The Mother of Dragons is now only two dragons strong. Jorah reproaches her for this but Dany knows what she’s doing: In trading a dragon she acquired all of the slave soldiers at Astapor and frees the king’s translator. Daenerys is a proto-feminist! I love this character. “All men must die”, she says translating her newly acquired translator’s Valyrian, “but we are not men.”

Daenerys also speaks about the inequities of war, seeking “the blood of my enemies, not the blood of the innocent.” But Jorah sets her straight: The death of the innocent is an unavoidable byproduct of war. This is a theme that we have seen play out in triplicate on Game of Thrones (e.g. the slaughtering of Robert Baratheon’s offspring children) and I’m sure we’ll continue to see this as the quest for the throne continues.

Look no further than the concentric circle of horse carcasses that Jon Snow finds himself in the middle of. This storyline is really taking it’s time but march on they must! Mance demands that Jon apprise them of Castle Black’s defense proving that Jon holds some value to them, yet they are still on very strained relations.

At the beginning of the episode, Robb Stark performs a funeral service for his grandfather and we learn that his men have captured two teenage Lannisters that are being held hostage. In doing so he lost 208 men which is devastating because they are already severely outnumbered by the Lannisters.

Speaking of hostages, we have a few hostages to check in on. Firstly, we see Theon escape from that dreadful torture device. The inside man revealed in last week’s episode releases him and gives him a horse to ride away into the night. Alas, his tormentors catch up with him. He is stricken off of his horse and is nearly raped when he receives assistance yet again. His sister undoubtedly yearns for his sensual touch.

We also learn that Jaime and Brienne have also been captured and things are not looking so bright for our unlikely pairing. Jaime manages to manufacture some swill in order to save Brienne from also being raped and seems to win over his captors with promises of coin from his father. As the saying goes, “A Lannister always pays his debts.” It is starting to look like a classic Jaime Lannister con until (ahem) they prostrate him over a tree stump and slice his hand off. His defining characteristic in which his moniker “The Kingslayer” is based lies in those hands and his way with a sword. How will he recover from this? Might he have to reinvent himself, perhaps relying more on those fancy words he spoke of?

I’m kind of getting annoyed with these cliffhangers which seem to wrap up every episode of Game of Thrones this year but ultimately I enjoyed this episode. 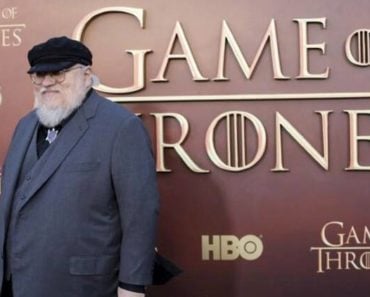 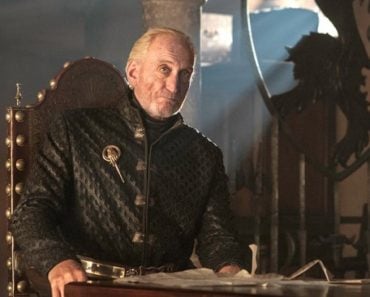 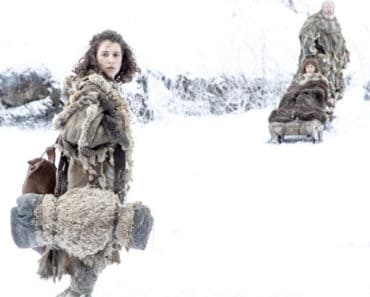 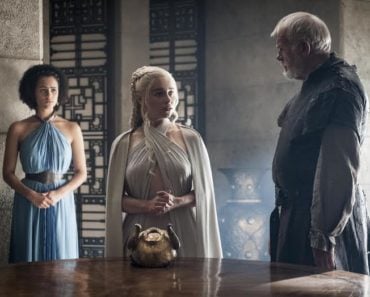