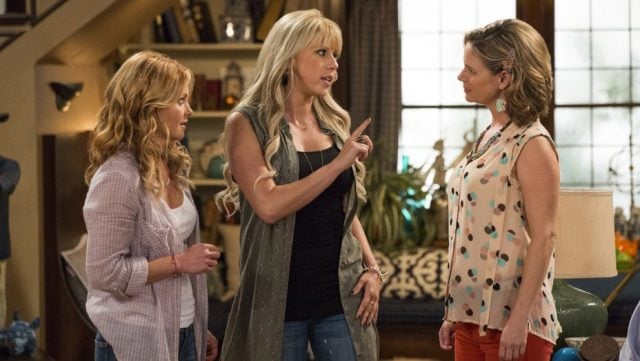 Fans of Fuller House were as excited as Michelle Tanner is for ice cream when the beloved 80’s sitcom received a spin-off on Netflix earlier this year. Though the comedy which stars Candace Cameron Bure and Jodie Sweetin was panned by critics, it received a lot of love from fans. Netflix quickly took notice and renewed the series for a second season shortly after the 13-episode season 1 was released on the streaming network in February. The cast is back at work filming season 2 episodes. Here are some spoilers we already know about the sure to be nostalgic new season.

Though you should expect Bob Saget to reprise his role of Danny Tanner in at least one episode of Fuller House‘s second season, he will not be the only sitcom dad from the 1980’s that will be showing up to visit the famous house on Girard Street. Alan Thicke, who played Jason Seaver on Growing Pains, posted a picture on his Twitter account while on the set of Fuller House.

Last season, Stephanie has a brief romance with San Diego Padres’ Hunter Pence. Jodie Sweetin admitted to Entertainment Weekly that she will have a new beau and that it will be “a really fun surprise. There could be a connection to Full House.” Sweetin believes that Stephanie’s infertility will be discussed more during season 2 as well. “Now that we talked about it, we can’t just leave it and never discuss it again,” Sweetin told Glamour.

Last season of Fuller House, saw D.J. Tanner dating both Steve and Matt. Though both Scott Weinger and JOhn Brotherton have been promoted to series regulasr for season two, they will not be the only men D.J. will be dating. She will fall for another suitor, who turns out to be gay. Also, Steve will be getting close with a D.J. lookalike named C.J.

4. Dave Coulier Will Direct an Episode of Fuller House

Not only will Dave Coulier be reprising his role of funny-man Joey Gladstone for season 2 of Fuller House, he will be stepping behind the camera as well. Coulier will be directing at least one episode of the series. He told Glamour that viewers may get the chance to also meet Joey’s wife and kids. Additionally, John Stamos will be producing the entire second season.

Due to the high demand for the beloved series, Netflix may air season 2 episodes before the end of the year. That would mean that fans will only have to wait ten months to see fresh episodes of Fuller House instead of 12 months like with other Netflix shows like House of Cards and Orange is the New Black.

Are you excited for the second season of Fuller House? Let us know in the comments section below.