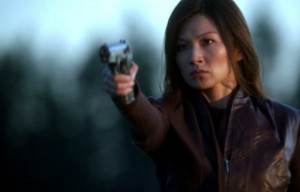 If you’ve been watching Fringe this season, then you’ll recognize Michelle Krusiec as the actress who played one of the new, human shapeshifters. If you haven’t been watching, maybe Michelle herself can convince you to give it a shot! Michelle took the time to chat with us this week about her experiences on Fringe: covering everything from how the show is like an illicit drug to what it’s like to play a superhuman. Michelle also reveals the previously-unknown ‘shapeshifter’name of her character. The shapeshifter has been known only as Nadine, who was first introduced in the season premiere, and was seen most recently in last week’s episode ‘Enemy Of My Enemy’. I will say that I myself am curious as hell about what the shapeshifter name may signify…

And now I’ll let you get on to the good stuff:

TVOvermind: Had you been a fan of Fringe before working on the show?

Michelle Krusiec: I can’t honestly call myself a fan prior to working on it, because that would make the real fans pretty upset since they are true fans. I watched the pilot and I was intrigued, but I’m not an avid TV watcher. Mostly because of time and lack of it, nothing to do with the show itself. I remember watching Fringe randomly one night earlier this season and I was totally confused by the two Olivias, but still, I was intrigued, and wondered what in the world the storyline was about!

What was it like to work on the show?

I was really giddy with excitement because it’s a J.J. Abrams show and my character was just so awesome. I was told she was a new breed of shapeshifter, but I had no idea what the hell that really meant, in terms of the show’s mythology; I got to work and started watching as many episodes as I could. The first episode I was in, I was mostly dead, and since it was raining in Vancouver, I basically watched 36 back-to-back episodes. I felt like some junkie hopped up in my hotel room. My curtains were drawn. I’d watch it in bed, from the bathtub, with room service. I couldn’t stop watching it. I was completely hooked, and in complete awe of the storyline.

I’m such a sucker for sci fi because my Dad and I bonded over them growing up. Whenever sci fi is at its best, it makes you examine morality, ethics and the human condition: it really brings to light great questions and theoreticals about mankind and behavior. In the case of Fringe, I was really struck by this notion of how one man’s mistakes affect two universes and the people in them. The way the writers explored these questions while still maintaining a procedural show was impressive to me. And then to top it off, the calibre of acting on the show was so striking. I felt like I had won the lottery to be invited onto the show. 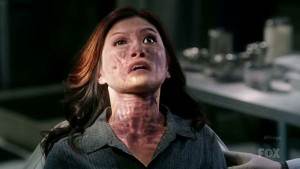 What are some of your favorite memories and experiences from working on Fringe?

Some of my favorite moments include getting my face scanned for the digital effects and seeing a 3D version of my face on the computer. And I loved my character’s name “Seven” because it’s just a badass name.

I loved playing with the guns. I took that very seriously. I felt that a shapeshifter would move differently than humans and I wanted to be completely collected when I was operating firearms. I practiced rolling around on the floor and shooting, which I never did in the show, and the firearms expert even told me while I was doing it, ‘they probably won’t ask you to do that,’but I’d just keep on rolling around on the floor. Basically, any time I got to kick ass, I was giddy with excitement because Seven has superhuman abilities and you just don’t get a chance to play characters like that very often. I was a little jealous whenever I had to shapeshift into another human being though, because another actor played that part. But it was also really awesome to see how they lined up my face with the other actress Lori Triolo’s face so they could shift our faces together. It was odd how our features were actually very similar on camera. Who would have guessed I’d have Italian features?

Doing the shapeshifting in and out of characters was more challenging than I expected because it had to be subtle and it’s mostly digital effects so your face is like a canvas. The first time I did it, I just went crazy and after my first take the director Joe Chapelle just said, “Uh, make it smaller.” That made me laugh, because I think I may have gone a little overboard with it. All the other shapeshifters made it look so painful, so I thought I was doing exactly what I’d seen on the show, but I was mistaken. There’s a great scene where Seven is injecting herself with the formula to correct her genetic mutation that’s preventing her from shapeshifting on command. I loved shooting in that bathroom because it was a small little space and any kind of transformation scene like that for an actor is really fun to do.

I also loved seeing Gene the cow. I wish I had taken a photo with her now… Can you tell that I had a blast shooting this show? 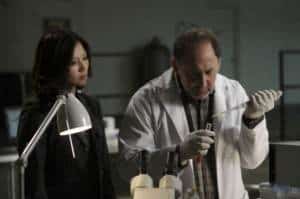 How did you approach your character?

I really developed Seven with an animal in mind. You’re probably laughing, but I took this role very seriously. I felt like it was a great opportunity to work off of the pre-established mythology, and since Seven is a new breed of shapeshifter, I wanted to see what my imagination could come up with. Since I had three weeks off in between episodes, I developed this idea that Seven is a super soldier but with empathic capabilities. As a soldier, she has a direct mission objective she has to follow, but since she’s also part human, she uses her ability to experience human emotions to convince Malcolm Truss to help her. I tried to find moments in the episode where she could emote like a real human being and play “Nadine”, her human form, but then switch back to shapeshifter Seven. A lot of those moments didn’t make the final edit, because there’s just so much info packed into these episodes, but I had fun prepping it.

What made her different from other characters you’ve portrayed?

What makes Seven different? She gets to scale walls! She pokes guys’eyeballs out! My stunt double, who was amazing, had to do wire work to scale that wall and I would have given anything to try the stunt myself: being superhuman is pretty much every kid’s fantasy.

Was there anything you’d hoped to see explored with her that we didn’t really address? Given that characters never really die in Fringe, it’s not entirely beyond the realms of possibility that we might see her again someday…

I’m always fascinated when robots have emotions. I’m really intrigued by that. I had hoped that she would continue to work for David Robert Jones, but then begin to show signs of empathizing with the humans and switch teams. I also wondered what would happen if she and Olivia ever got into a fight. Two badass women squaring off? That’s a season finale, come on! 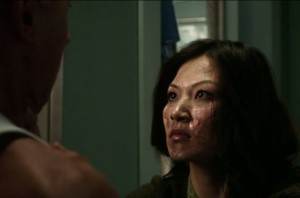 What was it like to be a rather central ‘baddie’this season?

I wanted more. I was very sad when I read that Seven gets shot. I think I went right into mourning, but what was really incredible was being introduced to the Fringies. I had no idea there were such loyal fans out there. I really didn’t want to let them down. Although, having become a fan of the show myself now, I understand the addiction and the loyalty. There’s really nothing quite like it on TV.

What’s next for you? Are there any projects you’d like to mention?

I just wrapped a comedy called Nice Girls Crew. I’m waiting to begin work on the feature Relative Insanity, and I’ll be guesting on Touch next.

Many thanks again to Michelle for taking the time to do this interview, and for the thought-provoking answers! I always find it fascinating to hear inside perspectives on my favorite show, and I find it rather wonderful that she turned into a fan after working on the show. If you have any questions or comments, feel free to post below! You can also reach Michelle on Twitter here: @michellekrusiec.