Home
Television
Fringe
Fringe 4.01 “Neither Here Nor There” Review 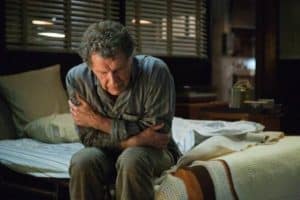 As I’m sure you’re all more than aware, Fringe returned tonight after a painfully long summer hiatus with a premiere that, in many ways, felt like a pilot. ‘Neither Here Nor There’serves the function of introducing us to this new, confusing world wherein Peter Bishop, to quote the enigmatic Observers, ‘never existed’.

Even after all these months, I’m still no closer to figuring out quite what it means to say Peter never existed. Initially, I had a huge problem with this in terms of consistency and plot (not to mention that I like the character). I’d have a hard time believing Walter would be willing to tear a hole between the universes unless it was to save his son. Thankfully, tonight’s episode (maybe) cleared that up a little bit: I now take it to mean that Peter did actually exist, he just never ‘lived to become a man’. My guess is that September still distracted Walternate, which would also explain why it’s still September’s mess to clean up, so Walter still had to cross over and take Peter. Presumably, Peter then died on this side. Walter had to watch his son die twice and lost his tether to the world; Walternate had his son stolen and vowed revenge. However, I do wonder why the Observers, if they have enough power to completely erase someone from time, couldn’t simply stop September from distracting Walternate in the first place.

One of many utterly fascinating facets of this episode was seeing the differences in the characters and in their relationships with one another in the absence of Peter. It was certainly a treat to see Astrid playing more of a field agent role, even if it comes at the expense of Walter being afraid to leave the lab. I’m not sure whether it was intentional or simply a byproduct of the tone of the episode, but Astrid seems to be less indulgent of Walter’s quirks, a bit less patient with him. 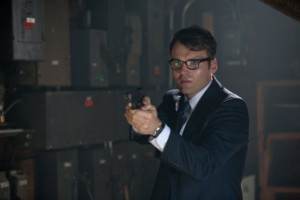 Olivia’s dynamic with Walter seems to have gone in almost the opposite direction. Presumably, without Peter to act as a buffer, Olivia had to learn how to get through to Walter and how to handle him, and likely was forced to come to terms with his role in the Cortexiphan trials sooner. One of my favourite moments of the episode was when Olivia seemed to ground Walter in the lab after he climbs out of the Tank in a panic; she seems to be able to reach him, much like Peter used to. I often used to wonder what the relationship between Olivia and Walter might look like without Peter to play mediator, so it’s interesting to see it playing out now: sometimes it’s easy to forget that Livia and Walter share a complicated history of their own.

As much as I enjoyed this episode — I think it was one of the most well-done ‘reboots’of a show I’ve ever seen — there are still some things that give me pause. Some events apparently played out as we’ve seen in the last 3 seasons, yet I’m at a loss as to how some of them would occur without Peter’s influence. For instance, what reason could Olivia have possibly had for crossing over to the Other Side (thus leading to her capture) without Peter? That being said, I love that the change to the timeline hasn’t completely invalidated everything we’ve seen on the show before.

Evidently, without Peter’s influence, AltLivia never experienced the paradigm shift, if you will, that led to her realization that the people on Our Side are not the monsters that Walternate purports them to be. She seems a lot more like the alternate we met in ‘Over There’than the one who risked everything to try and cross over to Our Side to warn Peter. Yet her insights into Olivia appear sound: I don’t think Olivia has ever trusted anyone easily, and now that the younger Bishop isn’t around, it seems like she’s more guarded than ever. Although, Olivia does seem to be opening up to Lincoln (played by new full-time addition to the cast Seth Gabel), perhaps because he reminds her of herself in some ways: Lincoln’s introduction to Fringe Division certainly parallels Olivia’s own. I’m also curious about Lincoln’s past, and what his comment on family meant — maybe now we’ll finally get an explanation as to how exactly Lincoln Lee and Cortexiphan kid Nick Lane knew each other. 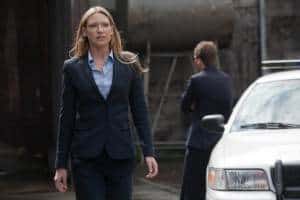 I had actually hoped that Olivia would be the first to perceive Peter, given the effect Cortexiphan seems to have. While that doesn’t seem to be the case, I do find it curious that she feels as though something is ‘missing’. I know something about feeling as though life took a turn that it wasn’t supposed to, but at least I know why I feel that way. Olivia certainly doesn’t have that luxury. It piques my curiousity all over again in regards to the kind of mechanism the Observers used to ‘erase’Peter from existence. I also like to think that if Walter and Olivia are feeling Peter’s absence, it must imply that they retain some memory or impression of the Peter they knew and the experiences they shared.

The new ‘human’shapeshifters certainly throw an interesting wrench into the mix. As Olivia notes to AltLivia, the ‘˜shifters have always previously been under Walternate’s control: does this mean that he is already betraying the accord? Or does it mean that there is another player on the scene whom we haven’t yet met? I assume, since Michelle Krusiec’s character ‘Nadine Park’is supposedly recurring, that we haven’t seen the last of the human(ish) shapeshifters.

As Olivia so aptly pointed out, the answers we get in Fringe always seem to lead to more questions. But it certainly looks as though we can expect to get some answers this season, particularly about the Observers, and hopefully where exactly Peter Bishop is, since September refused to erase him completely. ‘Neither Here Nor There’was certainly a strong start to season 4, and having already seen next week’s episode ‘One Night in October’, I can tell you that if it’s a portent of things to come, we’re in for one hell of a ride. B+