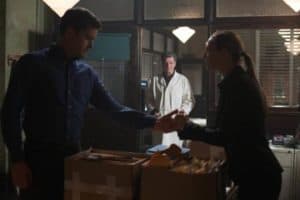 Last night’s episode of Fringe was one that we’d been waiting for since this season began. It picked up right where last week’s ‘Welcome to Westfield’left off, with Olivia seemingly slipping back into our Olivia from the original timeline. The case of the week was distinguished by a great performance by newcomer Harrison Thomas as a patient misdiagnosed with schizophrenia, but was largely overshadowed by the confounding developments between Olivia and Peter.

Even though we’ve seen Peter and Walter’s relationship becoming much more similar to the one we’d grown to know and love in the original timeline, this new Fringe episode saw it reverting to mistrust and suspicion, at least on Walter’s part. Walter’s preliminary explanation for the fact that Olivia is remembering events from what they have been assuming is another timeline altogether is that between her Cortexiphan-magnified empathetic abilities and Peter’s desperation to get his Olivia back, some sort of memory transfer is occurring. In this new timeline, Peter’s absence has facilitated a much closer relationship between Walter and Olivia, and I think we were definitely seeing that at play here. Not to mention the fact that Walter was right: it would be wrong for Peter to be trying to twist this Olivia into someone she isn’t. Walter saw first-hand the universe-shattering effects of trying to hold onto someone you love, and that his surrogate daughter is apparently being threatened now only serves to amplify his anger. 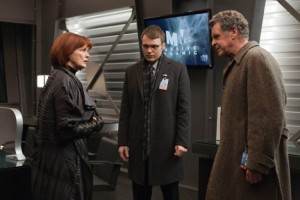 With all the questions that last night’s Fringe introduces, it certainly seems to finally answer one that has been much debated: we aren’t in a different timeline, but rather ‘our’original timeline that has been rewritten by the Observers. My favourite analogy so far is that the timeline is like a videotape: someone has recorded over the original movie, but traces of it still remain and can bleed through, under the right circumstances. It seems as though some combination of the Cortexiphan doses and the effects of David Robert Jones’machine in Westfield have triggered Olivia’s abilities. After all, reality is only a matter of perception. This was actually something I’d been hoping for since season 4 began, and seeing Olivia try to reconcile differing sets of memories should definitely be fascinating. One question I have, though, is whether Olivia’s regained memories include only the last 4 years with Peter, or whether they will apply to her whole life. There are some aspects of the two timelines that are very different for Olivia: for instance, whether or not her stepfather is still alive, and the fact that she was raised by Nina Sharp.

Speaking of Nina, I’m so glad that we finally get an explanation for her behaviour. She’s always been quite an ambiguous character, and while it’s never been easy to tell whose side she’s on, I hated the idea that she could so thoroughly betray someone she raised as if she were her own daughter. There are still some debates going on, but my guess is that Nina was, at some point relatively recently, replaced by one of Jones’human shapeshifters. Although the new human shapeshifters are almost completely indistinguishable from their human models, they wouldn’t have the memories of the person they were impersonating. Earlier this season, we saw Nina and Olivia reminiscing over events from their shared past, so I assume Nina was replaced sometime after that. David Robert Jones used to work for Massive Dynamic, so it’s conceivable that he would know that only Nina had access to the vault where the information on Cortexiphan and the trials was kept. Nina’s connection to Olivia also made her ideal as a way for Jones to get close to Olivia. The most pressing question I have right now is why? What makes Olivia so special that even now Jones is fixated on her? Olivia’s newly regained memories may give her an edge against Jones that he isn’t expecting, which could certainly make things even more interesting. 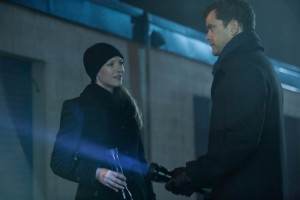 There have been aspects of this new timeline that I’ve found quite frustrating, but ‘A Better Human Being’went a long way towards redeeming that. On the one hand, I don’t want the time we’ve spent in this new timeline to be wasted, but on the other hand, I still want our characters and timeline back, and don’t want to feel as though the first three seasons have ceased to have meaning. We may be getting the best of both worlds with these new developments. That being said, I also don’t want to see Peter repeating his mistake: as he himself points out, he has confused Olivias before, and in doing so, betrayed the Olivia he loves. But when it comes down to it, what makes us who we are is the sum of our memories and experiences: if Olivia remembers their past together, then isn’t she, for all intents and purposes, his Olivia? I loved the moment between Peter and Olivia that mirrored the heartbreaking events of the Fringe episode ‘Marionette’— Peter knows now that this is his Olivia because when he looks into her eyes he finally sees the person he loves.

I thought that the case introduced some very interesting questions about genetic experimentation, and given how far science has progressed, it is an inevitable destination. One issue with genetic modification at the embryonic level lies in the question of where to draw the line, and it’s indisputably a slippery slope. I love that Fringe still continues to raise ethical issues that are endlessly fascinating to debate.

Next week’s episode of Fringe is ominously called ‘The End of All Things’, and, given the way ‘A Better Human Being’set up the next episode with one hell of a cliffhanger, it promises to be quite something. It looks as though we’re finally going to get an explanation for the Observers, as well as hopefully learning something of what David Robert Jones’endgame is! A-