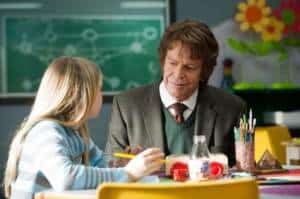 If you look at episode 2.15 of Fringe, titled “Peter,” you’re probably like most in thinking that it’s one of the show’s best episodes. You’re quite right; the episode received great critical acclaim when it first aired, and was declared one of the best television episodes of 2010 by many critics. So how would Fringe, the best-written show on network television, follow up its acme? Could it perhaps top “Peter”?

“Subject 13” didn’t top “Peter.” That’s the inevitable comparison to be made with the episode, and to be fair, “Peter” is clearly superior. But look at it this way: “Peter” was the climax, “Subject 13” was the falling action of the show’s flashback timeline. “Peter” was significant because it opened us up to an entirely different story, with new characters, and put everything we were seeing in mid-season two into a new context. “Subject 13,” however, wasn’t as innovative: it was more of a ‘puzzle piece’ episode that revealed character motivations but ultimately not much else. The mythological elements, for example, were nothing we didn’t already know (Olivia can transcend universes when she’s emotional).

No, it’s undeniable that this episode was more about the characters than the plot, though unlike last week’s “6B,” neither suffered from the imbalance. Instead, we were essentially given a reiterated but solid mythological episode for our characters to interact upon.

Speaking of the characters, the acting this week was once again solid. John Noble is becoming less and less believable as a younger Walter (his hunched stride into Bishop Dynamic seemed more resultant from age than grief), but his acting abilities were otherwise unhampered. Both as Walter and Walternate, he created a character to really, really sympathize with. Seeing Walternate’s motivations instead of them being implied wasn’t groundbreaking, but it was powerful. Same goes for Orla Brady’s powerful performance as Elizabeth Bishop in this universe, as we saw the tip of the spiral that would lead to her eventual suicide.

The child actors were great as well; I could really buy that both of them were younger versions of Anna Torv and Joshua Jackson, and strangely enough, I found their encounter fleeting enough that it was believable for them not to remember it. By the way, that scene with young Olivia in Walter’s office at the end? Heartbreakingly well played. Kudos to her.

In the end, “Subject 13” isn’t going to be remembered in that same fond light as “Peter,” to which it will be forever compared. But it will bask in the glow of being one of the best episodes of season three, taking a firm third place after “Entrada” and “Olivia.” A-