To kick off Fringe Fridays, ‘The Firefly’certainly burned bright until the moment it burnt out. For Sam’s review of the episode, click here and to check out our in depth recap just keep reading! 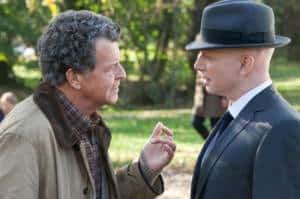 The episode began with Walter about to inject himself with a concoction that will restore the pieces of his brain he had once asked William Bell to take out. Peter stops him and reminds him there is a reason he asked Billy to take those out. He didn’t like the man he was becoming so why would he want them back now? (Of course we, the audience, know the answer….everything Walter does is about protecting Peter. He loves his son more than himself or anything in the world.)

We cut to a nursing home where Roscoe Jenkins (one of Walter’s favorites from the band Violet Sedan Chair and played by the always fantastic Christopher Lloyd) has a meeting with his son, Bobby, who died in 1985. This is the same year Walter brought Peter to this universe. The Observer, September is outside and asks the young boy if he told him.

The Fringe division is called in to investigate this meeting but before heading out Olivia receives a book from Peter, ‘If you Meet the Buddha in the Road, Kill Him.’Thinking this is for Bolivia she gives it back to Peter. It only reminds her that he didn’t know Bolivia wasn’t HER and that’s she’s missed so much. If Bolivia asked what his favorite book was, then it wasn’t meant to be shared with this Olivia. Things between them are tense and sad.

We see Walter putting the rest of his brain serum into a milk bottle as Roscoe is trying to remember what Bobby said to him. Meanwhile September is speaking with another older Observer. He is on a mission. He has set things in motion to find out if Walter really has changed. While he believes he has, the older Observer is more skeptical of the elder Bishop.

September tells Walter they need to speak. Walking in the park, you could feel Walter’s anxiousness radiating through the television screen. He needs to know what is going to happen with the machine and he pleads with the Observer to not have Peter taken away from him.

The Observer relays a story to Walter about a firefly. After pulling Peter and Walter from the lake that night in 1985, Peter found a firefly which set off a chain of events that would end with Bobby, Roscoe’s son, dead after being hit from a truck that skidded through a traffic light.

We’ve seen the effects of Walter’s decision to save young Peter in both our Universe and “Over There” but this death took things to a personal level. The weight of this responsibility is hard to bear for Walter and he is shaken and scared. His realization of what he’s caused in both worlds is hitting him hard and his mounting fear that Peter will be taken away is inescapable.

‘You and I have interfered with the natural course of events…’says September. When the time comes, ‘give him the keys and save the girl.’

Continued on the next page…