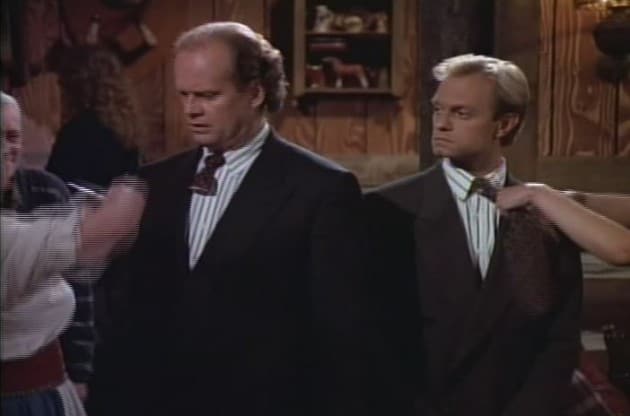 In an odd way, some of Frasier‘s earlier seasons are refreshing to watch (save for the dated era they take place in), because of the show’s ability to manipulate the traditional sitcom format into something that offers true conflict under its canned laughter, the kind that doesn’t come to easy resolutions through a quick monologue and a couple punch lines. The first season in particular is defined by Frasier rebuilding his relationship with his father, a task that doesn’t come easy for any male; “Dinner At Eight” is a great episode depicting how difficult this can be, using the heightened backdrop of a stage comedy to tell a story about two sons and a father who literally have nothing in common, except the woman that kept them all together.

“Dinner At Eight” is really the first episode where Hester Crane’s death lingers over the series. When the boys decide to take their father out for a nice dinner at Le Cigar Valant (the invisible “stuffy” restaurant prototype that would eventually become Chez Henrie), they talk about how different their tastes and likes are, and how their mother was always the one who kept them together. Going a bit further, they discuss why their father never picked up the cultural tastes Hester had, Frasier noting he spent so much time working so they could have a good upbringing, he probably never had the chance to. So he and Niles take him out to dinner to thank him and expose their “lumbering polyester dinosaur” to a fancy restaurant, even as they realize he’s a man very much set in his ways (“as we all are at some point,” Frasier notes).

Yet, Frasier and Niles fail to recognize the true purpose of why they’re taking him out; they’re really doing it for them, and their selfishness shows in the episode’s climatic dinner scene (which comes after Daphne meets Niles, and Roz complains about a date; there’s not much else going on in this episode), which is a full nine minutes of its 21 minute running time. And while the scenes are filled to the brim with one-liners and throwaway gags, the sons’ behavior begins to reveal the true rift between generations in the Crane family. Niles and Frasier’s love for the finer things has turned them into snobs, people whose holier-than-thou attitude eventually ruins dinner, after the two continue to poke fun at the food, the waitress, and anything else they can think of about Marty’s favorite restaurant (admittedly, the tie cutting bit is a dangerous thing to do).

That attitude reveals more about the damaged relationship between father and sons than the first two episodes combined tried to explain: aligned closer with their mother, Marty felt isolated from the family, the simpleton who didn’t fit in – especially after Hester died, the woman who would enjoy a ball game and a hot dog with him, and enjoyed it just as much as she liked introducing her sons to the opera. Her death severed the only thing connecting the three of them together (besides their last name and calf muscles, according to Niles), and that separation clouds the dinner at The Timber Mill (itself is a placeholder for McGinty’s, as Valant is to Henrie for the sons).

It ends in a very unexpected place: after growing frustrated and embarrassed by the behavior of his sons, Marty leaves before dessert arrives (“But the mud pie!” Niles screams after him). Ashamed, he tells them how Hester never made him feel stupid or simple, knowing when to shut her mouth and just enjoy something because it made him happy; the boys are unable to do that, their lack of empathy bringing to light just how deep the cracks in their relationship are, and how revealed they’ve become since Hester died, and Marty moved in with Frasier. Oddly, this is where the episode ends: there’s no hug at the end, no promise to “do better.” Marty simply leaves, an attempt at building out their relationship failed, and Niles and Frasier end the episode dealing with this, sitting through a long, unpleasantly greasy dinner, punishing themselves for disappointing their father.

What “Dinner At Eight” underlines here is unspoken and wonderful: the two of them still aren’t enjoying their dinner at all, again only doing it as penance for what they did wrong. There’s no resolution in “Dinner At Eight” because Niles and Frasier still haven’t learned anything – heck, the last joke of the episode involves the potato on the table, a line of humor Frasier instigates. The two of them have been spoiled and changed by their sherry drinking (which finally debuts in this episode): they didn’t earn the typical sitcom ending, and “Dinner At Eight” rightfully denies them that, the episode concluding with them suffering silently as they chew their meal over the closing credits.

That is a bold statement for a spin-off in its third episode, and it sets a tone for the first season of Frasier that gives it the slightest of serialization, an ending that would gain meaning in retrospect with later episodes (“Dinner” also suffers from a lot of Maris bashing, hardly the first or last time Frasier would indulge in this). In addition to feeling much more lived in through the first two acts (thanks to improved radio scene material, and the introduction of the Niles/Daphne dynamic), the deep conflicts alluded to in the final act firmly establish solid emotional arcs for the season as a whole, a wonderfully clever tease of the wittier, more cohesive form of Frasier to come.

– I mentioned it above, but the Niles/Daphne courtship begins in full force this episode, with Niles drooling over Daphne in the extended scene they share together in Frasier’s living room.

– Niles’ drink of choice at the Timber Mill: Stoli Gibson on the rocks, with three pearl onions. Not two, not four.

– His steak order is equally hilarious: “Seared on both sides, and pink in the middle. Not a true pink, but not a mauve, either. Bear in mind, the slightest error either way, and it’s ruined.”

– Marty: “Niles, your country and your family are to die for. Your food is to eat.”

– I do know what a Bobby Dazzler is, Daphne – I don’t think anyone does.

– Niles and Frasier share not one, but TWO high fives in this episode. The Todd is fuming right now.

– I would never, ever claim a steak off a beef trolley. Never.