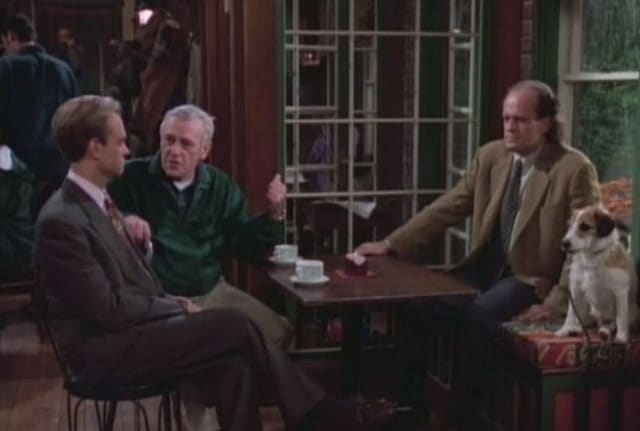 Niles’ question to Frasier at the beginning of “My Coffee with Niles” is one we as a society often overlook. We spend so much time in pursuit of a better, more productive, more lucrative, happier life, that we often forget to pause and reflect, and actually take the time to be happy. Those moments are fleeting in adult life, thanks to the complexities of mature emotions and the bleak outlook of modern society; so when Niles asks Frasier whether he’s happy or not, it’s no surprise Frasier is speechless – who would be able to answer that question with a simple ‘yes’ or ‘no’?

“My Coffee with Niles,” Frasier‘s adaptation of My Dinner with Andre, is the epitome of the show embracing its psychological roots, an episode that isolates Niles and Frasier at Cafe Nervosa for a philosophically rich half hour of conversation between two brothers. After a first season of increasingly shallow installments, “My Coffee with Niles” returns Frasier to the deeper explorations of the early episodes, focusing on each character of the main cast, and reflecting on the conflicts the show’s mostly played for humor throughout the first season. Unlike most sitcom season finales that aim for big plot twists and loud moments, “My Coffee with Niles” is more a reflection on Frasier’s first year in Seattle than an episode that’s looking and planning for whatever might come next. Instead of trying to hook audiences with something to talk about all summer, “My Coffee” revisits the various tensions explored through the first season – and delivers perhaps the finest episode of the series in the process.

Even the construction of the episode is impressive, beginning with the poor barista who has to return Frasier’s coffee four times before he’s satisfied with it. Her entire presence is built towards the ultimate payoff – which, working backwards, comes from the question Niles poses, and Frasier continually gets distracted from answering when other characters show up at the cafe (or at one point, when the brothers move inside after it starts raining). When Frasier finally answers whether he is happy or not, he’s alone at the table for the first time in the episode, turning a recurring gag into a wildly satisfying moment for Frasier Crane, one of the few bright spots he’s given through the series.

Of course, “My Coffee with Niles” is best remembered for what it does with Frasier’s brother. When trying to deflect attention away from the question of his happiness, Frasier straight up asks Niles whether he is happy with Maris, and whether he’s in love with Daphne. His answers are the most sobering things Frasier ever offers (save for its continued torture of Frasier’s romantic life). Niles admits that him and Maris are like “old friends,” and that he’s never felt passion like he’s felt for Daphne, though it’s never something he’ll act on (at least, until his wife goes off the rails – but I’m getting ahead of myself). Niles admits that he’s never experienced true joy in his life: at best, he can say he’s content with his life, and that gives the events of the rest of the episode a very distinct feel.

Impressive enough is how well Frasier and Niles’ arcs throughout the season are addressed in “My Coffee”; consider how it integrates Marty, Daphne, and Roz into this story in varying degrees, and the achievement becomes even more remarkable. Though Roz and Daphne’s thin characters are exposed a bit here – it’s basically “Roz can’t find love, but loves getting laid!” and “Daphne’s British sensibilities are odd!” – Frasier really brings the season home with one last reconciliation between father and sons in its final scenes.

At first, Marty’s crankiness seems to be enhanced just to create some tension in the episode. However, it’s later revealed that he’s mad at both his children for forgetting his birthday last week, even though he knows it’s something silly to be mad over. Again, “My Coffee” is exploring how happy its characters are, but using Marty’s frustration as a way to convey how connected these three are to each other, and how their happiness is ultimately defined by their reunion in Seattle. After the two apologize, watch how quickly tension diffuses from the episode: the three agree to have dinner later (at a German restaurant, of all places), and that’s it. Everyone’s smiling, and Frasier realizes that yes, he is happy, despite the nagging feeling he’ll be alone forever and end up like his father. He is happy, and for a moment, he gets to enjoy that, knowing he has a family as complicated and eternally tortured as he is. And in the end, isn’t that all we’re looking for in our friends and family?

Though I’ve seen the episode a dozen times, “My Coffee with Niles” remains an affecting, deviously inspirational episode of Frasier, and one I often return to in periods of reflection. The question “Are you happy?” is a haunting one, and even “My Coffee with Niles” recognizes it’s not one that really has a satisfying answer (Frasier’s exact words are “Yes, I guess I am”). All we can do is enjoy what we have, and embrace the brief moments of clarity and resolution that the world throws at us – and of course, enjoy a nice, quiet decaf, no-fat milk, never been around a sprinkle of cinnamon Zimbabwe latte on a rainy day when we get the chance.

– Niles’ thoughts on Roz: “She’s kind of comely, in a back alley sort of way.”

– I hope the Toast Sweat debate rages on forever in the Crane household.

– David Hyde Pierce delivers an all-time spit take when Frasier asks him if he’s in love with Daphne.

– Niles delivers one more zinger to Frasier’s career, calling him “psychiatry’s answer to the drive-thru window.”

– Marty playing blind to get his dog into Cafe Nervosa is classic – he doesn’t even hesitate before putting on the act.

– “What do you guys talk about in here?” “Oh you know, sports, chicks, monster truck rallies.”

– And that marks the end of our journey through Frasier‘s first season. If you’d like to see this series continue through Season 2, let us know in the comments – thanks for reading!