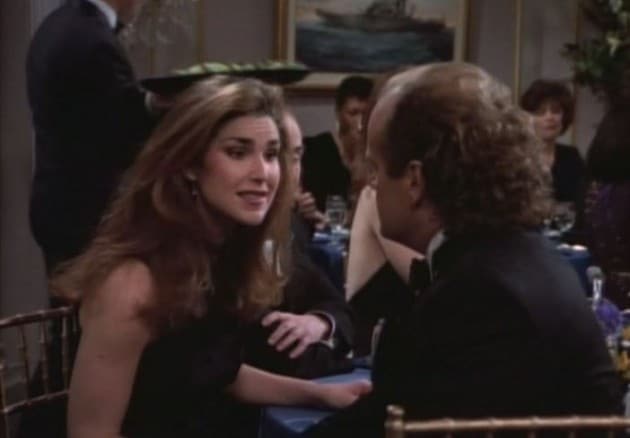 Perhaps Frasier‘s biggest conflicts throughout the series aren’t his romantic pursuits or attempts to rebuild his relationship with his father. “And the Whimper Is…” suggests a much different struggle for Frasier Crane throughout his adult life, one that rings especially true in the show’s later, hollower years. As as self-obsessed psychologist, Frasier’s goals in life often come at odds with each other: while he works very hard to help others find peace and happiness within themselves and their lives, Frasier’s self-absorbed approach to life often denies him the same pleasures. Of course, much of this conflict is suggested; often, Frasier’s failures are played up for slapstick moments, utilized for their comedy rather than their troubling look into the difficult mental conundrum this often places Frasier in.

Unfortunately, that comedy usually involves Frasier making sheepish grins while making a fool out of himself. “And the Whimper Is…” holds no punches here, doling out the punch lines when Frasier and Roz get nominated for a Seattle Broadcaster’s Award (“the SeeBee,” as they call it), and make fools of themselves trying to secure the award. Things get off to a surprisingly good start: Frasier decides to buy expensive champagne to celebrate, insisting on detailing the price to Daphne and explaining how one should open fancy corked bottles, as to not spill the valuable contents inside. He then spills it, embarrasses himself, and everyone laughs: in a nutshell, it’s a fun little takedown of Frasier’s buttoned-down ways, his dramatic behavior and constant sense of entitlement.

As “Whimper” progresses, however, those little takedowns stop being funny – and eventually, stop being takedowns. “Whimper” revels in Frasier’s childish behavior, laughing as Frasier and Roz buy expensive gifts, and talk about how they’ll shove 11-time nominee Fletcher Gray’s mother out of the way if that’s what they have to do. They’re unabashedly unapologetic about themselves, and Frasier doesn’t really have much to say about their pathetic behavior: it just shrugs its shoulders, gives the award to two other people (poor Fletcher retires a 12-time loser, apparently), and moves on with its life.

That’s fine. Being a sitcom, it’s expected most of what happens in a 22-minute episode is going to be self-contained, even the most revelatory emotional moments between characters. However, there’s a responsibility within that 22 minutes for Frasier to characterize the self-aggrandizing behavior of its main character beyond “he has no dignity” – what really makes the episode frustrating is how close it comes to making all of this mean something at some point. Marty hints at something when he talks about Frasier’s lack of competition growing up, which denied him the ability to learn how to deal with losing; Bebe even gets into the mix a bit trying to push Frasier and Roz to win the award, which always challenges Frasier’s moral boundaries. But Frasier’s eventual behavior is simply accepted as an obvious byproduct of the situation, which undercuts the authority of the show’s central figure in a pretty major way.

So many interesting story avenues available in this episode, and instead, we get basically four scenes, three of which feature Frasier pandering to every human around him to help win the award. And it all comes without a smidgen of reflection, a moral play that exists without any sense of its own morality: Frasier loses, the episode ends, and that’s that. Weirdly structured and thoroughly superficial, “Whimper” is a terrible introduction to The SB Awards, a plot mainstay of Frasier through its 11 seasons, and one that would occasionally find some cathartic value in its send ups of pretentious award shows, and the people participating in them. “And the Whimper Is…” is light years away from being that effective, a weightless 22 minutes summed up perfectly by its laughably bad title.

– Frasier’s existentialist club once named him “Most Likely to Be.” This is the funniest joke in “And the Whimper Is….”

– Why does Frasier keep making Roz go on dates with Noel? Why wouldn’t she just go alone to the SB’s if her hot Channel 8 date couldn’t make it?

– Why the hell is there a “Miss SB,” and how would one win that award?

– Bebe meeting Niles is amusing, if only because her presence breathes much-needed life into this episode.

– The closing tag, where a depressed Roz drinks with Fletcher’s ancient mother, is pretty adorable.