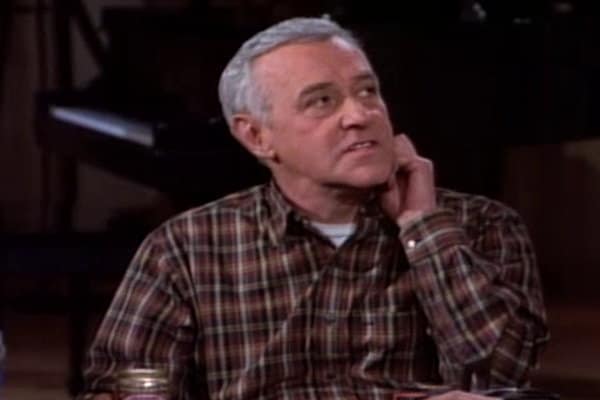 Frasier’s obsession with psychology is his gift and curse: as often as it helps him exhibit his intelligence and analytical skills, it often prevents him from connecting with human beings. He’s always quick to develop a psychological profile on someone after meeting them, immediately assuming he knows how to assess their personality and morality; this often leads him into trouble on Frasier, both as an easy comedic device and a serious investigation into Frasier’s inability to separate himself from his work. While baked directly into the premise, this facet of Frasier isn’t an intricate component of “You Can’t Tell A Crook by His Cover” – and it’s to the episode’s detriment; backed by a strong Daphne story, “You Can’t Tell a Crook” is an episode that avoids emotional resonance in favor of comedic folly, and ends up being a little lesser for it.

There’s a slight undercurrent of Frasier’s capacity for instant judgment in “You Can’t Tell a Crook,” but the episode never engages it beyond the comedic value of it. Unfortunately, that comedic value is sorely lacking: save for some typical ‘felon panic’ of American television (where ex-cons are considered the irredeemable bane of society), “Crook” is mostly concerned with making Frasier look like a fool for the sake of it. He incorrectly assumes two of Marty’s poker friends are convicts because one mentions that Daphne is an attractive woman (because lesbian = felon?) and the other is a little socially awkward – the big “twist” is that the felon is a nice, balding white man, the one person Frasier never accused of being a convict.

And then Daphne agrees to go out with him, and all hell breaks loose. The three men of the Crane family start going on about “protecting Daphne,” preventing her from going out with such a dangerous criminal (the same man whose small, meek stature was deemed harmless by Frasier moments earlier). Oddly, “Crook” never holds Frasier and his male family members responsible for this judgment; he turns out to be a creep anyway, which kind of deems the whole prison plot line a dumb, unfunny mess of undercutting Frasier’s so-called ‘skills’ as a psychologist, in favor of making him look like an idiot.

However, there is some good that comes out of that story: all the freaking out Frasier, Niles, and Marty do over Daphne allows her to assert herself as a character in new and exciting ways. She beats up her date off-screen, and then proceeds to emasculate a bunch of pool sharks by whooping them over and over, like Paul Newman reborn in a black dress adorned with white flowers. It’s quite a fun little twist on the morality play of the episode, re-assembling Daphne’s character into something a little smarter and tougher than previous installments, focused on her flighty tendencies as a ‘psychic’ and silly English woman trying to find her way in the world. Coming so late in the episode, her shaming of the Crane boys is satisfying, but too short-lived; had the conflict between her and the men in the family arisen a little earlier in the episode, a little more life could’ve been given to the Daphne/Frasier dynamic, allowing the show to give a bit of depth to her story adjusting in the US, and Frasier adjusting to not making assumptions about her as a human being.

Nonetheless, “Crook” is an improvement over the previous pair of episodes, finally finding some unity in the portrayal of its characters, and the stories that play out in accordance with said personifications. Frasier’s need to instantly judge people closes him off from people around him, something that would become a focal point of the series in its more serious moments throughout the years; “Crook” might only broach this idea in the most abstract of ways, but how it uses that to fill out the personality of another central character on the show is illuminating, a bit of commentary of sorts about hanging in with a show through an early rough patch, understanding that there may be more than what meets the eye. In an otherwise laughless episode of Frasier (seriously, this episode is kind of a drag, humor-wise), that idea helps keep everything afloat for 22 minutes, a benefactor of the show’s (apparent) renewed focus on its characters.

– Frasier and Niles order two lattes with skim milk, which the barista refers to as “Gutless Wonders.” What the what?

– Niles’ Tae Kwon Do lessons are going well: “My instructor says I’m two lessons away from being quite threatening.”

– The guy who keeps changing his bet with Daphne at the bar is played by infamous character actor Robert Miano.

– Frasier’s Harvard graduation did not go well: after a car backfired, half his graduating class walked with wet gowns.