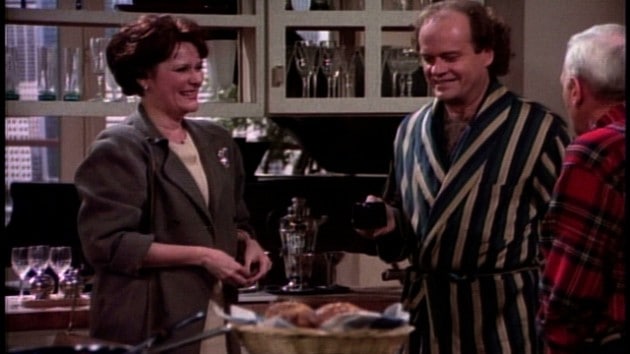 The most frustrating episodes of Frasier are those where the star is reduced to a bumbling fool, a clown in a man’s suit running around and throwing wrenches into the lives of people around him. This doesn’t necessarily doom an episode, but it can, and in “Guess Who’s Coming to Breakfast,” Frasier’s out-of-character moments unhinge an otherwise pedestrian episode, turning an installment of silly conflict into a rather ugly half hour for the Crane family.

Cut out the normal rhythms of Frasier episodes – that is, a scene of Niles fawning over Daphne, and another where Roz details her dating life – and “Guess Who’s Coming to Breakfast” is nothing but Frasier embarrassing his father at every turn. At first, this is a bit charming: when Marty has an overnight date with a neighbor, Frasier can’t figure out how to break the tension in the kitchen when he realizes she’s slept over. However, his fumbling over words and turning things like “sticky buns” into sexual innuendo is only entertaining on the most superficial of levels; when the conversation moves from kitchen to dining room table, and “Coming to Breakfast” refuses to stop with the double entendres, the story quickly becomes stale.

Unfortunately, “Coming to Breakfast” was only getting started; rather than try and make a Marty-focused story on his blossoming relationship, the episode instead takes a much uglier turn. Frasier talks about his father’s date on the radio (which all of Marty’s date’s friends listen to), and then she doesn’t want to see Marty anymore – that is, until Frasier again makes a big show of their relationship on the radio, and then she suddenly wants to see him again. Rather than treat Frasier’s “noble” gestures as what they are – Frasier’s jealous that his father is dating again, something the episode doesn’t ever address – “Coming to Breakfast” rewards his childish behavior, and in the process, defeats the purpose of the entire conflict, reducing it to a forgettable little story of laughs.

There’s just not a lot about this episode that feels in character for Frasier – and that feeling sinks in long before we meet Noel Chemsky for the first time, introduced as the office nerd and Roz’s date for the evening. Yes, that’s correct: the picked-on nerd that Frasier would kick around time and time again gets introduced as someone Roz is seriously considering dating – and if there’s a sign that this episode exists in some weird, quasi-alternate Frasier universe, it’s Roz agreeing to go on a date with Noel (and furthermore, going out of her way to defend him). Of the many logical errors that occur in this episode, this one may be the most regrettable: unless, of course, you count the absolute non-presence of Elaine as a breathing, thinking human being, which completely undermines any emotional element the episode could have outside of Frasier and Marty bickering for a few minutes.

From beginning to end, “Coming to Breakfast” is a forgettable episode of Frasier, a sad return for the show to air in January 1994 after its first Christmas break. Knowing it was the most-watched episode of the show’s first season gives this episode an odd legacy, as well. In a way, it gave audiences a preview into what kind of show Frasier would be like in its later years, when farce became the norm and Frasier’s bumbling behavior became his defining factor, rather than an occasional device for humor. And what a sad preview it is: devoid of anything humorous or emotionally rewarding, “Guess Who’s Coming to Breakfast” is a new low for Frasier‘s freshman season, a thoroughly disappointing half hour that fails to engage on any level with its audience.

– NBC must’ve advertised the return of Must See TV quite heavily in the winter of 1993: along with Frasier, Seinfeld and Wings also had their highest-rated episodes of their respective seasons on January 6th, 1994, when “Guess Who’s Coming to Breakfast” aired. Some also might remember that date for another reason: it is also the same day Nancy Kerrigan was attacked. Maybe everyone was just waiting for the 11pm news.

– There’s a hint of something compelling broached when Frasier talks about freezing people in roles we’re comfortable with, but the episode never grasps it in any kind of interesting way.

– At one point, Noel makes Roz a spice rack. He also gets ridiculed for being a Star Trek fan, the original ‘nerd insult.’ 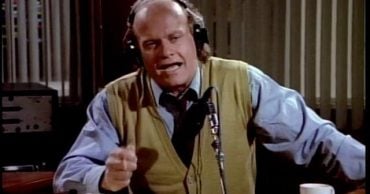 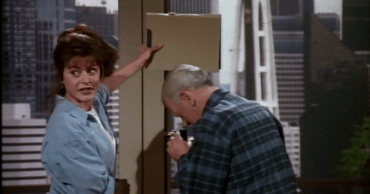 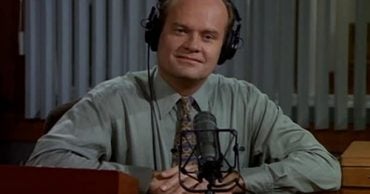 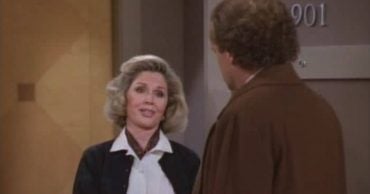 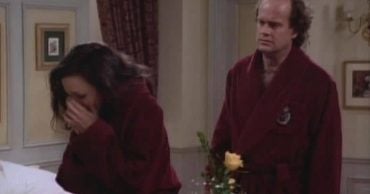 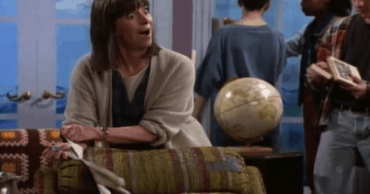