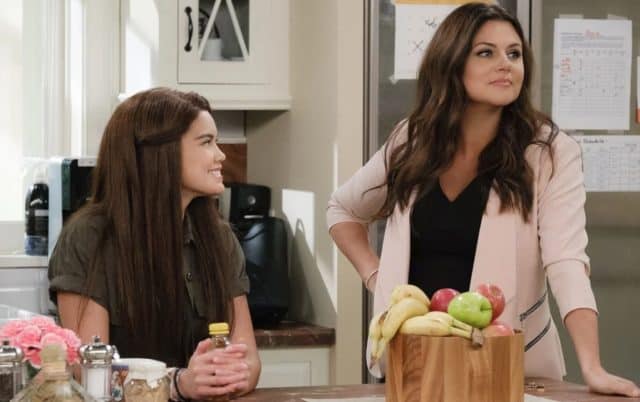 Alexa and Katie is a new show that just premiered on Netflix on March 23rd and is one of the many shows that is beginning to show the empowerment of girls and women by showing them in a strong and positive light. It also deals with another subject that will be mentioned in a moment and stars Saved By the Bell’s Tiffani Amber Thiessen as the mother of Alexa, a young girl who, along with her friend Katie, is doing her best to fit into high school.

We’ve all had that kind of issue in our lives at some point, right?

This is where the typical high school experience differs from a lot of people since Alexa is undergoing treatments for cancer. While it’s not a foregone conclusion sometimes she does end up losing her hair and has to find some way to fit in so that she won’t look weird or give other kids a reason to harass her. Kate, her best friend, is of course there to help out and do what she can in order to make Alexa feel less self-conscious.

4. Tiffani Amber Thiessen is more than willing to give advice to her younger costars.

She’s not the type to go giving it out and pushing it on people unless they ask, but once they do express a desire to learn she’s more than happy to talk to them while using her years of experience to help them out. That’s the kind of support a costar should be giving and it’s uplifting to see that people in the industry do care enough to make sure that their younger counterparts are given the kind of information they crave.

3. The show gives Thiessen Saved By the Bell flashbacks.

It’s not the same show obviously but it does manage to get people thinking of back in the day when Tiffani was the one that was going through the issues and hardships of high school. Even without having to deal with the issue of cancer high school is hard enough as every single day seems to bring a challenge that young people have to deal with. If nothing else it might remind her and others of just what to expect on any given day.

2. The show is about fitting in for the most part.

Fitting in with the crowd in high school is difficult enough without being different. Too many young people are so insecure that judging others is the only way they feel normal and in some cases sane. But with an issue like cancer it becomes even harder to fit in as the affected individual tends to find that many of their peers simply don’t understand enough and might subsequently treat them very different.

1. The matter of cancer was taken very seriously but is still able to be worked in so that the show is able to produce laughs.

Cancer is not a laughing matter as it kills a very substantial number of people each year. But by taking the time to be sensitive to the issue and treat it with the respect that is deserved the show could at least be able to be heartwarming as well as funny.

So far it sounds like a good family show.