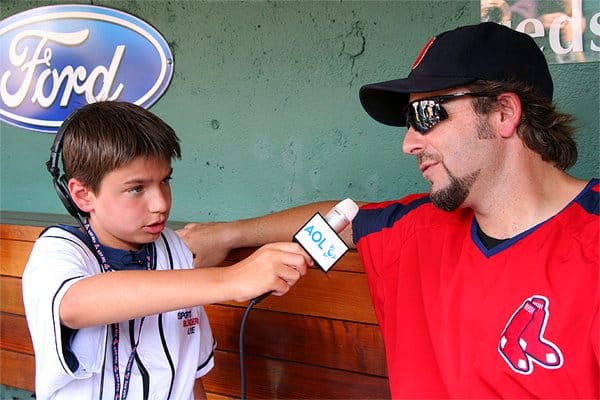 Alex Riemer is an on-air journalist and known personality at WEEI, which is based in Massachusetts. To date it would seem that he’s been doing his job fairly well and has stayed out of trouble for the most part. But not too long ago he decided to make a major faux pas that you’ll read about in a moment. One thing that any radio or TV personality needs to understand is that making a decision to talk about certain people or those related to them is in fact a choice they can make, but there are times when it might be wiser to choose the path of discretion over the attempt at making news.

5. He was suspended indefinitely from his post at the WEEI radio station.

It all started when he decided to rip on Tom Brady, which in that part of the country you just don’t do, and take it even further by calling Brady’s daughter an ‘annoying little pissant’. Even those that don’t care for the Patriots and especially Tom Brady would be able to tell you that taking the time to target someone’s family, even if they’re on TV for the show Tom vs. Time, is not a wise move. His station issued a formal apology

4. He’s been targeted on social media.

He’s doing his best to rally back against the many people that seem to want his head but it’s a losing battle against a tide of opinion that he’s one of the worst folks on the planet at this time. To be quite honest he did speak out of turn but to think that he had every right to do isn’t wrong, it’s simply not wise. Brady even went so far as to say that he might reconsider appearing on their radio show again after this.

3. He questions why there aren’t any openly gay players in any major sport.

He came out after college and has been completely open about his sexuality. This issue is still one that sparks debate but at this time shouldn’t be much of an issue at all really. If guys are good enough to play then they can play. Their sexual orientation should be their business if they want to disclose it. If they do and they get fired or harassed then things need to change, quickly.

2. He’s been writing about sports since he was a kid.

Riemer has been very involved in sports journalism since he was about 12 years old and has been active in the field for quite some time. In all that time one would have thought that he might learn what not to say and what’s okay. It’s not so much that he’s the worst person in the world, it’s just that after so long a slip of the tongue should be something that a person knows to guard against.

For many this would be reason number one why he shouldn’t be badmouthing Tom Brady at all and shouldn’t be taking cheap shots at the quarterback’s daughter. So what if the show seemed scripted, doesn’t he know how Reality TV works?

It was just poor judgment in that one moment. Hopefully for his sake he’ll learn from this.