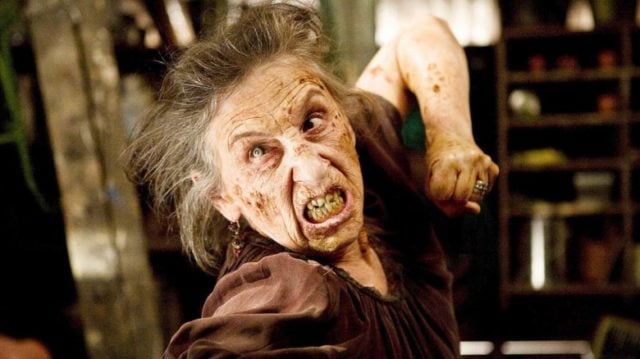 The rating system doesn’t always get it right when it comes to movies, which is why there are horror films out there that have received a rather lower rating than R. In some cases the movies might be old enough that the PG-13 rating hadn’t been invented yet, but for a lot of the movies on this list that’s just not the case. For some odd reason these films were left off the R list and allowed to be something lower despite the fact that they’re obviously more than you’d want the average kid watching. Some adults can’t even handle these movies without screaming in terror, so why in the world wouldn’t they be rated R?

The guidelines are supposedly set for such ratings, but sometimes it seems like they drop the ball.

If you can believe it this film was actually rated PG when it came out. Yep, people getting eaten and blood staining the water red didn’t deserve an R rating apparently as the giant shark managed to get off with one of the tamest ratings in the history of movies. Most shark movies you see today usually get a tentative to solid R rating just because you know that at one point or another they’re going to get bloody.

The title alone should tell you that things are going to happen that no PG movie could possibly cover. This is something that is catering to adults and should be given a very definitive rating that doesn’t mince words. This film is a virtual splatterfest and yet it’s not enough to make the needle jump enough to turn it into an R rated movie, which is surprising since anyone having embalming fluid vomited into their mouth should make that rating move pretty quickly.

The absolute terror of this one should have been what put it over the top. The dread, the unmitigated fear that was caused by the walk in the astral plane. A lot of adults jumped when the red face appeared out of nowhere but a lot more jumped when the ghosts in the astral plane were in one location and then suddenly in another when the person looked back to them again. Come on, that didn’t terrorize you as a viewer?

Mama might have been a bit campy in certain places but it was still flat out creepy. It went back to the whole idea of ghosts moving around in a creepy, disjointed way that suggested that they were made of sticks and had to move around like a puppet with their strings cut. Plus the way that Mama came and went within the house was just flat out terrifying.

Anything that has the word Ouija on it should be an R right out of the gate. Nothing good has ever been associated with those boards no matter how much people say they’re harmless. Perhaps it’s just superstition but this movie is creepy enough that it should have earned that rating without question.

The people that rate these movies need to take a second look sometimes.