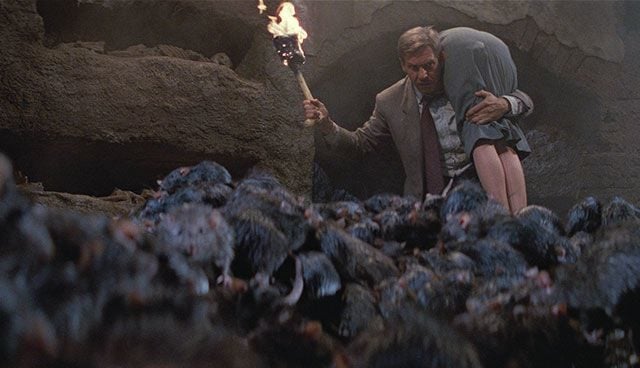 Rats make wonderful pets and they are allowed in many rentals where larger animals are not, but not everyone is comfortable having one in the house. Some of the most horrific scenes in popular movies feature rats as major players in certain scenes. They have their place as horror figures that inspire fear and trepidation as well as innocuous pets that are timid and unobtrusive. Here are five movie scenes where rats were the main characters.

“Indiana Jones and the Last Crusade”

The brave explorer Indiana Jones has his own private fears like most people. He hates rats. This scene shows him recoil in revulsion as he descends into a dark cave lit only by a flaming torch. Hundreds of rats are there to greet him. You can tell by the look on his face that he’d rather turn and run as he says “Ohhhh rats.” Every super hero has his achilles heel and for Harrison Ford’s character, it is definitely rats.

The rat-master Willard discovers that the rats he has become friends with have a high level of intelligence. They are trainable. This is a scene that shows him in action, training his army of rats to do his bidding. Anyone who has seen the film is familiar with the command “tear ’em up.” This shows his first training session with Socrates, his favorite rat. This is the scene where he meets Ben and establishes a friendship with him. As with Socrates, he uses the term tear to teach the rats to shred newspaper. The well trained rats follow Willard wherever he goes and obey his sick commands, even to the point of destroying the people who Willard has become disillusioned with. This popular rat infested horror film became a huge success and was followed by the sequel “Ben” which, of course, featured the rat Willard had named Ben as the star of the show.

This 2015 movie showcased a rat in a humorous light. The family is in the SUV and stops to figure out directions for reaching their destination. As they sit in the vehicle, a guy comes from out of the woods and they engage in a conversation about how to get where they’re going. It is a friendly exchange that ends with Rusty asking the stranger about his pet rat. He recoils in terror and shakes the beast off. He didn’t know that the rat had hitched a ride on his shoulder in the hilarious scene where the rat was the star actor.

This is a delightful animated film about a rat who just happens to be one of the finest chefs around. Ratatouille is the story of a young rat in pursuit of his passion. It is a heartwarming movie for the entire family. A guest in the restaurant where he is cooking is initially horrified to see a menagerie of rats hauling in special ingredients for Ratatouille’s amazing culinary creations.

This notorious scene from the movie shows the good guys closing in on the vile demon who is keeping the heroine captive. In the process of making a hasty retreat, a door is opened to reveal a horrific scene. Hundreds of rats pour out and begin scurrying down the stairs to make the climactic moment even more dramatic.