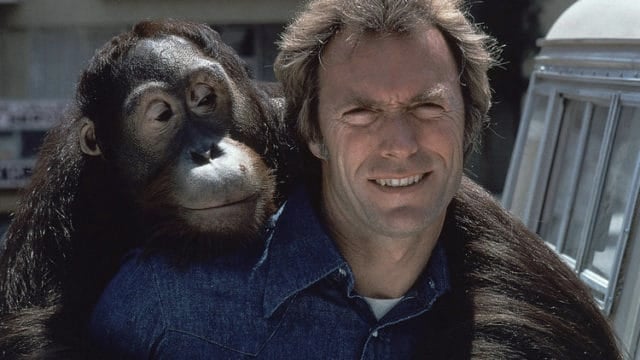 If you believe that Clint Eastwood isn’t a comedian you’d be right. But he’s had his funny moments in film throughout the years and a lot of them have subtle things that aren’t always immediately funny but become that way due to how the situation plays out. When it comes to good old Clint I’m a firm believer that he can be as funny as the next man but he tends to do it in a way that teaches a lesson while he’s being funny so that the moment doesn’t get wasted. He can laugh and joke and smile along with anyone but it’s his most deadpan moments that bring out some of the true funny scenes that are noticed in his movies. Those fleeting moments when you laugh simply because you get the joke and find it ironic in some way, that’s the best funny moment in an Eastwood movie.

He’s a master of the ironic comedy.

While in town the traveling pair came across a bunch of soldiers that wouldn’t have known Josey Wales unless he was boldly pronouncing himself to the world. His name was far more known than his face, and the moment it was heard he had to assess just who would go for their gun first. He was confident that Lone Watie could cover one of them, but the old Indian just had to make the remark that he could have missed. That was funny.

This is more serious funny really since the drifter is trying to at least make the townsfolk ready for the outlaws that are making their way back to the town for a little payback. Of course not all the townsfolk believe that the drifter is really that much of a man and decide to try him a time or two. This guy thinks twice when he realizes the drifter isn’t about to get stuck in the back.

Gunnery Sergeant Highway is pretty much comical all the way through even though he doesn’t seem like he should be. The guy is about as crusty as they come and tough as a coffin nail, which means that his squad had better shape up quick or they might feel something hard and persistent kicking them in the backside. That would be his bootheel the second before he rams it home.

2. Every Which Way But Loose

From the moment he stands up the bikers know that they’ve bitten off a little more than they can chew with Philo, or at least one of them does. It’s funny how standing up and revealing that you’re a lot bigger than someone can make them back down just a bit. It’s that moment of dawning comprehension that makes the scene funny and even more comical when you take note of the bikers in the trash within the next minute.

This probably shouldn’t be funny but it is because Richard Kiel is such a huge guy and it’s obvious what kind of damage he could do. Yet with two hits the preacher renders him defenseless, and still has the decency to escort the big man back to his horse. That’s pretty funny.

Clint Eastwood can do comedy, he just doesn’t choose to all the time.