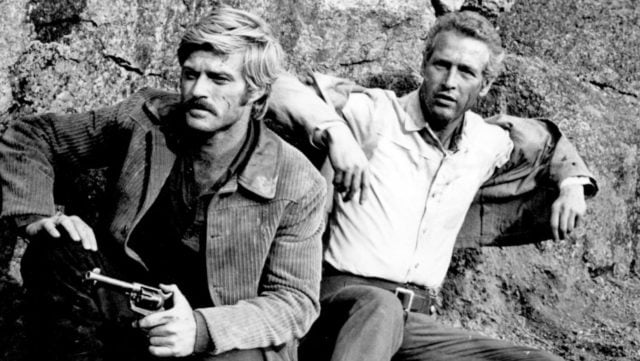 Do you ever find yourself tightening up and holding your breath when a character jumps off of a cliff in a movie? Or maybe your grip on the armrests tightens just a bit as you wait for that eventual impact. It’s natural to react when we see other people in danger no matter what our reaction. If the characters put themselves knowingly in that spot the adrenaline rush that follows is usually something you were hoping to experience. It’s a rush to be honest and something that we enjoy watching when our favorite character risk life and limb by falling from an impossible height to hopefully land safely below.

5. Butch Cassidy and the Sundance Kid

When you’re cornered and have nowhere else to go sometimes down is the only option. From the way Newman makes this sound you would think that they were aiming at a river only a few yards in width. That would be a challenge to be sure. But unless the water below is only ankle-high the impact with the water would be the worst part.

This is where credibility starts to break down. It’s an awesome scene and left a lot of people breathless, but it would have done the same to O’Donnell, whose character was already short of breath. Getting up to speed wouldn’t have been all that possible and holding one once he hit would have been just as impossible. Why? He’s fatigued, he’s falling from a serious height which generates a massive amount of momentum, and the rock isn’t bound to give way. Even if his axes bit deep enough the shock from his landing would be great enough to dislodge him.

Only to an adrenaline-junkie would this seem like a good idea. First off the bike is controlled by the rider but the surface isn’t controlled by anything other than nature. So it could have easily been the first guy that slid and fell if not for the fact that he’s one of the main characters and isn’t expected to die. But to follow after thinking that you’re going to succeed on a surface that’s barely big enough for two people let alone two people with bikes, well, that’s just not too bright.

Here is where cliff jumping is kind of a necessity for one’s continued well-being. In other words, if a guy is shooting at you with an automatic weapon and the only cover you can get to jump off a cliff, then it might be your best option. But hey, if you’re an experienced climber and know how to work it to your advantage then you should be okay.

Show of hands, how many would have rather taken the beating from the college punks than go diving off a cliff naked in front of even more college kids? That seems like a long drop to jump with your clothes on, and even worse if everything’s hanging out and bound to be pummeled mercilessly upon impact.

Cliff jumping is best left to professionals that are wearing those newfangled things called “parachutes”.