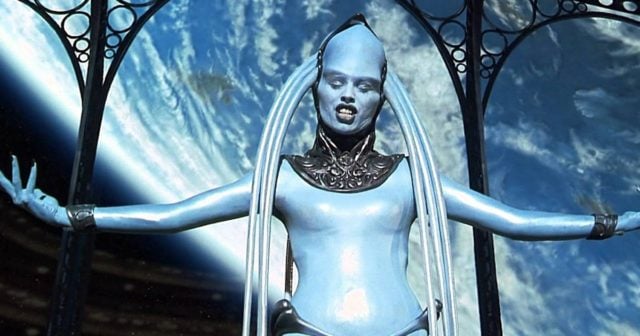 Remember Diva Plavalaguna from The Fifth Element?  Remember how amazing her voice was, not to mention her range?  There’s actually a story behind the song because it isn’t 100% what it seems.  While much of the song is sung by a real opera singer there are actually notes in there that human beings can’t actually reach.   This is a story told by Eric Serra Eric Serra tells about the notorious diva scene played by his girlfriend at the time MaÃ¯wenn, and of which he composed the music.

In that scene MaÃ¯wenn plays the diva but the voice is not hers, it is the one of a true opera singer, the Albanian Inva Mula. When the scene is shot she is a young talented soprano, yet her agent was Maria Callas’ one too, showing, if need to be, that she was already a promising artist. Today she is in the world’s top ten sopranos. For the scene to work, we needed her to sound like an alien, thereforee we had to create notes that no human could sing. So I purposely wrote un-singable things, some too low, some too high, sentences that were too fast, I would then arrange it with the sampler.

So until now it would seem that the Diva song is quite literally impossible to sing.  However, this Opera singer below nearly nails it.  Pretty amazing.   I also have the original Diva song from the movie for a comparison.