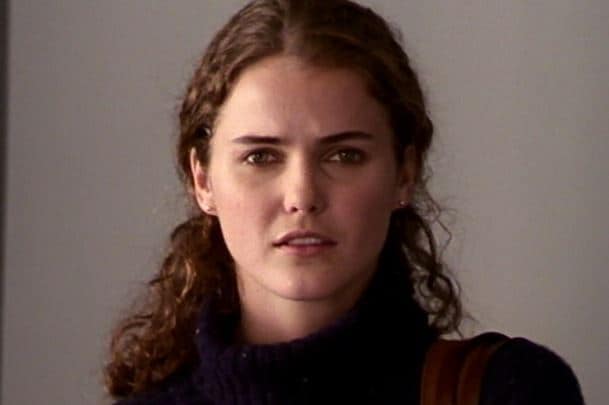 Over the course of the next few months, many of us at TVOvermind will be participating in our summer rewatch project and reviewing some of our favorite series of all-time that have left a major stamp on television and pop culture in general. Jen Winkler will be taking a look back at “Felicity,” which ran from 1998-2002 on The WB.

Before The CW came into existence in all its supernatural and superhero glory, there was The WB.  One non-vampire slaying girl in particular stands out from The WB’s golden years, and that would be Felicity Porter, the main character in the titular series Felicity.  This summer I’ve decided to revisit Felicity and friends in a rewatch, and I hope you feel inspired enough to do the same.

It’s safe to say everyone at least knows two things about this show, even if they’ve never seen an episode: Felicity’s haircut and the lifelong debate of Ben versus Noel.  Right off the bat, I’m going to declare myself Team Noel with one clarification: Felicity is and always has been Team Ben.  For God’s sake, she changed her college plans to follow him to New York after high school graduation.  That’s a pretty creepy thing to do considering they barely ever talked before, and here she is, chasing him across country.

One thing I love about Felicity though is her honesty.  She doesn’t even try to lie to Ben about why she came there when they see each other on campus in the fall.  She takes her stalker status one step further by taking advantage of her work study position and reads his admissions essay.  But get this: she even admits that to Ben.  This girl has no filter, and she doesn’t care who knows it.  That’s a quality to admire in anyone, however lowkey stalkerish their actions may be on the surface.  Once she’s given the opportunities to explain herself, and Ben truly does listen and understand, she’s not nearly as crazy as her circumstances make her sound.

This pilot basically wrote itself with the genius concept of introducing us to this character as she starts a new and scary chapter in her life.  So far, all we know about Felicity is she’s from a wealthy family in California with parents who had her whole life planned out for her: Stanford for undergrad and medical school.  After she’s spent just a few weeks in New York, she starts to realize that she needed this change.  We all might not come from such well-to-do families with such high expectations of us, but everyone can certainly relate to wanting to forge their own path in life.  Not everyone wants to follow in their parents’ footsteps.  College is as good a time as any to break out on your own, and Felicity is doing just that.  In one of the best scenes of this episode, she and Ben are talking up on the roof, and she admits that she didn’t go here for Ben.  He was just her excuse.  She went here for herself.  Good for her, and even better for the series to clear that up right away.

Felicity and Ben’s new friendship is definitely an exciting one to watch as it unfolds.  He knows she had/still has a crush on him, but he’s more interested in her other new friend, Julie.  This sets the stage for a classic love triangle that gets even more complicated when Felicity’s R.A. Noel shows a clear attraction to her.  So make that two love triangles set up by the end of the pilot, on top of the already daunting experience of this young adult breaking out from her parents.

Noel deliveres arguably the most memorable quote of the entire series in this episode, when Felicity seriously considers transferring out and moving back to California: “Stay in New York or perish.”  As cheesy as that sounds, Noel’s words and her soul-searching conversation with Ben is all Felicity needs to make up her mind.

What more can I say?  Fans of this type of show who rewatch it time and time again have no shame about being suckers for a good old fashioned coming-of-age story with every possible cliche.  The voiceovers by Felicity and her pen pal/French tutor Sally only add to the overall experience that make this show so iconically WB.

If I’ve sparked any nostalgia in you to rewatch Felicity, I hope you follow along with my reviews this summer.  The fun is really only just beginning!