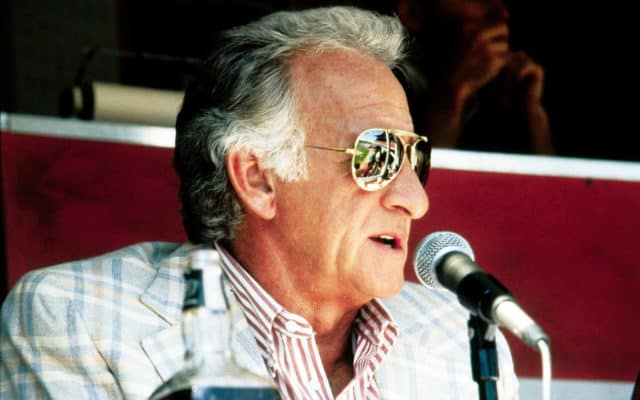 They can be the guys you love to listen to or the guys you wish would just shut up, but fictional sports announcers are never boring. Their entire job involves calling the game, throwing the occasional stat at the listener, and making the game a little more fun through their comments and throwbacks to sports history that will inevitably come in sometime during their broadcast. They are also essential however as those that can’t watch or attend the game tune in regularly to hear how their team is doing. So really, the announcer is pretty important, but sometimes they tend to get a big head.

As the voice of their team or their sport it’s only natural after all.

5. Ranch Wilder – Angels in the Outfield

This guy has as big voice and a short amount of patience for those he considers to be beneath him. The really sad part about Ranch is that he dogs the team he’s supposed to be playing up. Granted if your team is really that bad you might be entitled to get your licks in now and again, but Ranch really seems to be against his team and can’t seem to muster a nice word for anyone on his crew. Overpaid and overrated, he’s the kind of announcer most teams can do without.

Now these guys are just fun. Cotton is a sarcastic and witty guy and Pepper is, well, Pepper is Pepper. Together though they call the games down the line as they see them and do tend to add a little of their commentary from time to time. Give them props though, they call it fair and don’t really show any bias against or towards any team. Plus listening to Pepper pipe up now and again with his odd, quirky little sayings is pretty funny. “Pepper needs new shorts!”

There’s nothing quite like getting to do what you love. Smalls was never really the best guy on the team, and in fact if not for the rest of the guys he probably would’ve never learned how to throw or hit nearly as good as the rest of them. During that one summer though he became a part of the Sandlot and stepped into something magical that followed him the rest of his life. Imagine getting to call a game in which one of your best friends was playing. That would be a rush.

This had to be during his SNL days or somewhere around them. Rob Schneider wasn’t a bad announcer really, he had the right attitude and could talk his way through or out of anything. Plus, for a fumbling football team he called the games pretty accurately. Once he gets excited though he becomes a whole new level of funny.

Having been a baseball player in his earlier years it must have been special treat for Bob Uecker to remain with the sport that he loved so much. He was hilarious as he tried to play up a team that had gone beyond being a losing ball club to being a team in danger of being sold and essentially torn apart. Give him props at least for being funny and dedicated to a team that had trouble even getting on the board.

The best announcers are the ones that elicit a reaction from the fans be it good or bad. They know what they’re doing.