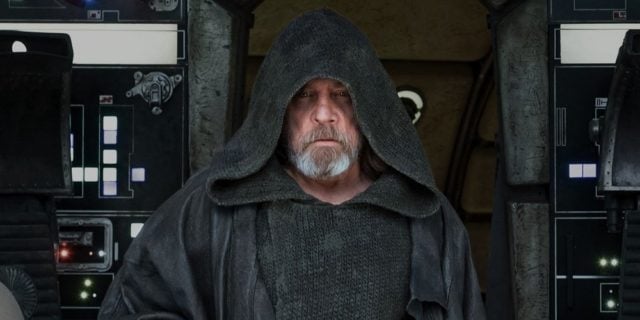 There’s one fan theory that tries to explain Luke Skywalker’s odd behavior in The Last Jedi, and it’s something that a lot of us might have looked past save for the fact that a lot of us probably watched the original trilogy before going to see the movie.  It’s his instincts, the core of his being that shifts and realigns with each new bit of information that he comes across. Like his father he was very tuned into the Force even though he didn’t know what it was at the time. Luke followed his instincts a lot and it got him into as much trouble as it got him out of, but this time, in this movie, he allowed his instincts to become clouded, and it cost him nearly everything.

There’s a reason why he’s a bitter old hermit that wants nothing to do with the world outside of his self-imposed exile, and it’s because he allowed his own legend to grow so big that it consumed him. He even says this in the movie. At one point when he was still a young farmboy with dreams of reaching the stars he had the raw, sharpened instincts of a person that had learned how to live in the wastes and survive. He knew at least enough of how to get around so that he was never in the wrong place, right up until he went searching for Ben Kenobi at the insistence of a droid he’d just met.

From that point on he continued to rely on instincts rather than training since even Obi-Wan couldn’t fully reach him in that short amount of time. He wanted revenge for his aunt and uncle after the Empire murdered them but he had no idea how to get it. He wanted to save the princess but he had no idea how to go about it. Every good thing he managed to do in the first movie was on pure instinct and luck, not to mention an affinity with the Force that he managed to tap into at just the right moment.

From The Empire Strikes Back and forward his legend began to grow as he was deemed responsible for the demise of the first Death Star, and then became famous when he deposed Vader and Palpatine. He was the Jedi Master at one point, the last among them that could truly bring the Order back. And then Ben Solo came to his school, and things started to get crazy. By that time he’d allowed himself to be sucked in by his own legend, thereby dulling his instincts and allowing the Dark side to build in Ben without his full notice. When he finally decided to do something about it his instincts kicked in, but then morality won out. He couldn’t kill his own nephew, but he wasn’t quick enough to keep Ben from seeing that he’d drawn his weapon.

So, after the destruction of his academy Luke made his way into exile. He couldn’t trust his own instincts any longer, and as a result he cut himself off from the Force. The mistake he’d made of believing his own legend was one he didn’t want to make again.