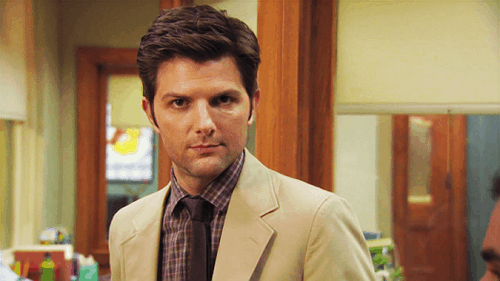 Similar to Chris Pratt, when Adam Scott first came onto the scene in Parks and Recreation he was not a big character.   He was there for some comic relief and was essentially the yin to Rob Lowe’s character’s yang.  He was more or less a crony, assistant, and supplement to the show just like Pratt’s Andy Dwyer.  But as time moved on the character of Ben Wyatt had a much more significant role in the lives of the government employees of Pawnee. In fact Wyatt became one of the most beloved and featured characters on the show.

One of the biggest trademarks of a show like Parks and Recreation, like The Office was the use of the “looking straight into the camera” angle.  Using the documentary shake camera style, this show was brilliant at nearly every moment one of their characters would look into the camera as if to say to the audience, “can you believe this?”  I think Ron Swanson was probably the best but Ben Wyatt is not too distant a second place.

So here’s a video of every single time that Ben Wyatt ever looked into the camera on Parks and Recreation.