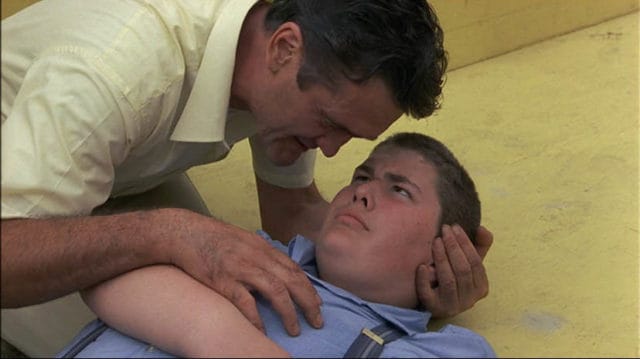 The summer holiday honoring the birth of the United States is a time to celebrate. Picnics, town fairs and fireworks are major events throughout the country. What fair would not include a food eating contest? From hot dogs to pies, these contests are prevalent. As we take a break from our 4th of July activities, we might take a moment to reflect on the most interesting food eating contests featured in movies. Here are 5 of the best.

Who can forget the blueberry pie eating contest scene from the classic coming of age film “Stand By Me” that was released in 1986? The film was directed by Rob Reiner and based on the novella “The Body” written by Stephen King. One very memorable scene is referred to as the “complete and total barf-o-rama” scene. While sitting around a campfire, Gordie (played by Will Wheaton), a budding writer, tells the tale of “Lardass”, a kid who got revenge on all of the bullies in town who taunted him. In the movie, the scene is reenacted on film while being narrated by Gordie. During the iconic scene that any preteen boy would appreciate, “Lardass” gets revenge on the town bullies by vomiting a massive blueberry pie and bile stream into the crowd gathered for the pie eating contest. The chaos ensues as it sets off a domino effect of vomiting throughout the crowd. Revenge was certainly sweet for “Lardass”.

As we enjoy the summer, it’s a great time to watch slap stick comedy movies about summer camp. Although not a major film, “Meatballs” remains a classic filled with summer camp hijinks. “Meatballs” was released in 1979 and was one of the first major films of Saturday Night Live alum Bill Murray. The Ivan Reitman directed movie also starred Harold Ramis and one of several films that Murray and Ramis would team up in. In the hot dog eating contest scene, camp kid Fink takes on a fellow contestant known as “The Stomach”. After Tipper, Bill Murray’s camp counselor” gives Fink a great pep talk to Fink, Fink, the underdog, wins the contest making his fellow camper friends and Tripper proud.

Although not comical, the hard boiled egg eating scene from “Cool Hand Luke” is certainly one of the most interesting food eating scenes in film. The classic 1967 prison film starred Paul Newman as a prisoner and George Kennedy as a fellow inmate. Paul Newman’s character, Lukus, is a rebellious prisoner continually beaten down while trying to maintain some element of integrity among his fellow prisoners. Luke gains his fellow inmates’ respect when they place a bet whether or not Luke can eat 50 hard boiled eggs in 1 hour. Luke succeeds leaving his fellow inmates in awe.

The John Hughes directed movie “The Great Outdoors” is an often overlooked movie but features several comic scenes delivered by co-stars John Candy and Dan Akroyd. John Candy’s character Chet takes a peaceful family vacation at a nice lake house before his brother-in-law brings his family to the house and upsets the peace. In this film, Candy’s Chet takes the extended family to dinner at a steakhouse. Chet takes on the challenge of eating a 96 ounce steak in order to not have to pay for the family’s meals. John Candy was a brilliant comic actor and the scene is classic John Candy humor.

The sequel to the movie “Beethoven” may not be the most popular sequel, but it contains an interesting food eating contest. The movie about the loveable family pet, a St. Bernard named “Beethoven” is filled with slap stick comedy that dog owners find hilarious. Beethoven often leads his hapless owner, Charles Grodin, into chaotic situations. The film released in 1993 features an owner and dog hamburger eating competition. Any dog lover can appreciate the humor in watching dogs eat their favorite people food. The scene stands out as one of the funniest in the movie.