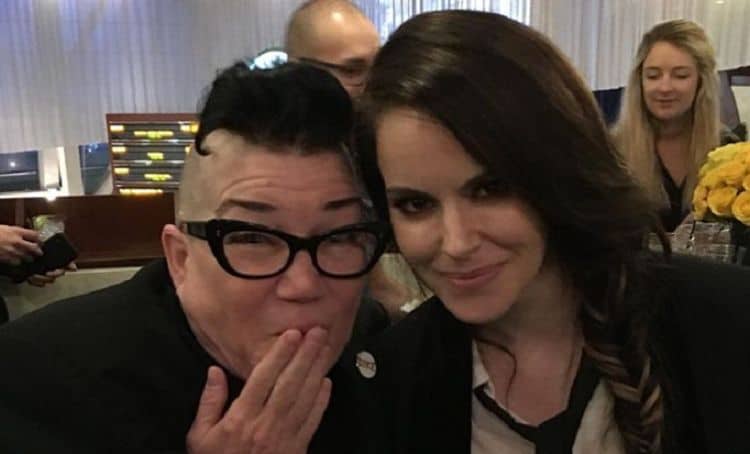 There are a lot of celebrities out there that are trending now and will continue to do so for as long as their popularity continues to rise. Emily Hampshire is one of them at this time and to be fair she’s done a great deal in her career to be worth the effort and can enjoy the accolades that are heaped upon her and the continued opportunities to do what she loves to do. Keeping that kind of intensity and attention going however is no doubt a bit difficult at times since people are going to enjoy what they want and if the celebrities in question aren’t a part of what’s new and hip as show business continues to move along they’re bound to be stuck in a spot where getting out and moving on could be difficult if not impossible. But so far it would appear that Emily is making her way forward and is doing just fine in her career.

Here are a few things about Emily you might not have known.

10. She identifies as pansexual.

For those that might still be questioning what this is, pansexual means that a person is not bound gender or sexuality and tends to identify as someone that enjoys everyone equally. It’s a different choice but some people happen to like it.

9. She is active on social media and has a fair amount of followers.

Emily is known well enough to have a decent amount of followers and their numbers have been growing throughout the years so it’s safe to say that she will continue to be known since she’s fairly active on a few different platforms.

Normally when you go to an Instagram account you’ll be able to see whatever pictures a person posts, but Emily and a few others tend to keep their pictures private for reasons of their own. It could be that she doesn’t like a lot of people poking around in her stuff or she posts things that are rather personal. To each their own.

7. Her engagement to and break with Teddy Geiger is pretty big in the news at the moment.

Libby Burke of Pop Culture is just one of many individuals that have been covering this story since it seems to be a big moment in Emily’s life at the time and has gained a lot of coverage. At this point though it would seem that the couple isn’t going to get back together, according to reports.

6. She attended an all-girls Catholic school.

One has to wonder if this really makes a difference in a person’s life, but it would appear that this isn’t the case no matter how many representations we see of it in the movies and TV. Of course it does likely change things from a social standpoint, just a bit.

So far her career has been going pretty steadily and moving in a direction that she seems to approve of in that she’s become a star that many people know about and happen to like. She’s still relatively young, kind of, so there’s a lot of time left to increase her reputation and become even more popular.

This is further proof that her career has been quite successful and that people have been willing to pay for the privilege of seeing her on screen. Some folks might not know about her, but then again enough folks have seen and enjoyed her works to the point that she’s become a very rich woman.

3. For a while it seems as though she didn’t want to open up about her relationship status.

She did seem to open up after a while but before that it sounds as though she was trying to keep things on the down low. I’ve said this so many times but I’ll continue to say it, people that work in the public eye usually want to keep some parts of their lives private, and they have the right to do so even if they don’t always have the ability.

TV has been very good to her for the past couple of decades since this is where she got started and where she’s really excelled. Some folks can bounce back and forth between TV and movies, but a lot of times those that start in one will excel there for a good amount of time.

1. There’s not a lot of information about her family online.

This could be another way to keep the spotlight off of a part of her life that she didn’t want to have highlighted. It’s understandable to say the least.

If you haven’t heard of her you might want to look Emily up.