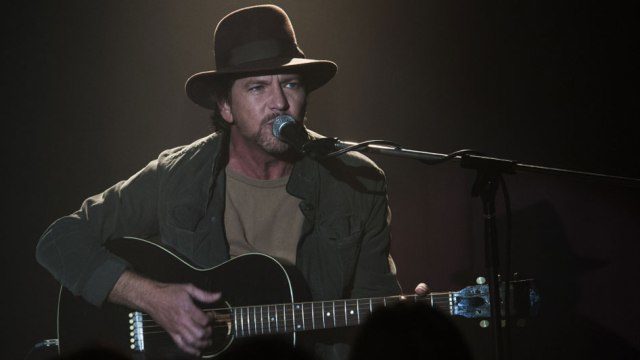 It’s a more refined performance Eddie Vedder brought to the new Twin Peaks revival. He sang the world debut of his song “Out of Sand” at the Dana Point Ohana Festival last year, and that Eddie Vedder gave a dig down into his guts rendition; so emotionally on point, in fact, that his dynamic contrasts often produced whispers of lyrics not easily understood. Combined with his slightly, but not quite, raspy voice, the effect was mesmerizing, and slightly painful, as we empathized with the universal truths he sang. Along with him, we could feel how he agonized over opportunities lost, connections which would not be again, and time wasted. It was a spectacular live performance.

But Vedder’s Twin Peaks version was truly more than awesome. It had all the truth telling of his Dana Point performance, but it had more. More focus, more clarity, maturity and nuance. Perhaps the differences were due to the setting. He was performing in the Bang Bang Bar roadhouse, and a single spotlight encircled him as he sat strumming an acoustic guitar. Perhaps it was the brown fedora he wore so well. Perhaps it was the rich chocolate brown of his shirt and coordinating undershirt. These visual details coordinated nicely with the surroundings, and ohhh was he easy on the eyes. Whatever it was, it was right.

More importantly, the song, which was brand new in Dana Point, has had time to mature and mellow within Vedder’s distinct musicianship. He was introduced as Edward Louis Severson, which is his true birth name. It’s tempting to think that he might have connected more strongly with the highly personal song as he heard his own name announced. It’s pure speculation, of course, but hearing his voice shaping the melody and painting the lyrics with a slight dusting of grit was spellbinding.

Twin Peaks and Eddie Vedder both debuted in the same year, 25 years ago. Frontman Vedder led Pearl Jam, one of the key grunge era groups when it released its debut album in 1991. Twin Peaks aired its last episode in 1991. The two artistic entities have been referred to as titans of culture for good reason. As several critics have noted, Twin Peaks merged mystery and supernatural darkness with naÃ¯ve notions about Washington state small towns and Mom’s apple pie. Pearl Jam is Seattle grunge rock. What’s finally happened, is that the two creative entities have sort of merged, with Vedder’s “Out of Sand” pairing well with the dark themes of the cult classic show.

Vedder interviewed with Twin Peaks creator David Lynch in 2010. Lynch’s interview presented Vetter’s backstory with precise questions about Vetter’s musical background. Vetter began singing when he was 5. He stole his uncle’s Beatles records (Yellow Submarine) and played them on a turntable in the basement. He loved Sly and the Family Stone and Motown, too. Vetter didn’t begin playing guitar until he was about 12. He played with many bands, but he ended up in Seattle, Washington because a friend asked him to go and play there.

In similar fashion, David Lynch was convinced to return to his most famous project for TV, Twin Peaks: The Return, because his friend, and original series co-creator Mark Frost, asked him. Frost invited Lynch to lunch at Musso and Frank’s Hollywood Restaurant to discuss the series return. Lynch agreed to return and create the show’s revival because he loves the Twin Peak world and its characters. He admitted that they are like family to him. He and Frost brainstormed many times over the right person for the role in the series.

The right people for the roles of musicians have been carefully selected, too. Lynch and Frost have included many stellar musicians to perform for the series, and included Vedder as one of the guest artists, though Vedder was a surprise addition when Lynch made his May 2017 announcement of the selected cast members. Vedder and the other top musicians have been performing at the Pacific Northwest’s fictional Bang Bang Bar venue throughout the series.