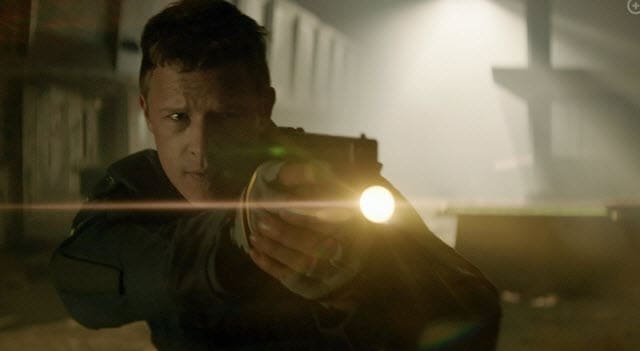 When I first saw the commercial for the show Dominion, I knew that it was a “sequel” so to speak to the movie Legion. While I never actually saw the particular film, I knew the basic scenario of it–the angels are going to war and a chosen one is born. I figured that this made me qualified enough to watch and enjoy it. I tried reading about the movie beforehand just to get some idea what I was getting into.

There was no point. There was a nice, long recap on the first episode about the war that seemed to be go on forever. There was one or two things that probably would be have been better understood if I had seen the movie but the show pretty much explained it all. For example, they made a big deal about the Chosen One getting tattoos from his father. In the reviews that I read they were crucial part of the movie but that wasn’t translated very well to the TV series at all. For little things like this they ultimately didn’t do such a good job making the connection from Legion to Dominion but other than that it was all right.

The show, set against a backdrop of Michael fighting against the rest of the angels for humanity, is about our hero Alex becoming the Chosen One and embracing his destiny to win the war. This doesn’t mean that he doesn’t have other stuff on his plate. He’s also got his girlfriend Claire, the chief administrator who doesn’t believe in the Chosen One, the City Lord who is stepping down… let’s just stay the Chosen One’s a busy guy.

Now, the TV show certainly has problems. It’s gotten the standard sci-fi tropes- unlikely hero who’s fighting against seemingly everything, an enemy that seems insurmountable, a love interest who just got engaged to someone else. You could pick these plot details out of most other science-fictions shows most of which have been cancelled. Also, the characters are all cut from the same piece of cardboard as all of the other’s show. However, there are also some good aspects to it. First, Anthony Head is playing the Chief Administrator and if you can get the guy who played Giles from Buffy the Vampire Slayer to do your show, it’s already gone up a few notches for me. Next, they do open up a huge playing field. Just involving the angels to start with is big. That factor alone would be enough. Then add to that a political power game, scare tactics (in this episode they involved the citizens of their hometown and a human possessed by an angel), romance, and the city of Las Vegas. They’re set for the season! As far as the acting goes, it’s hit or miss. There are some actors who you just want to see more off, such as Head, and other actors that you wish would just get off the screen, such as his son, played by Luke Allen-Gale. My issue with him is that I know he’s good. He just seems bored and just seems to want to finish the project sooner rather than later.

I’m going to give it a chance. It’s not the best show I’ve ever seen. It’s certainly not the worst though. It seems like once they get more of the pieces or just focus on one or two, this show could work. If not, there are always repeats of Buffy of Vampire Slayer. It’s got all the same stuff including Anthony Head.