Home
Movies
Comedy
Does The 40-Year-Old Virgin Hold Up Nearly 15 Plus Years Later? 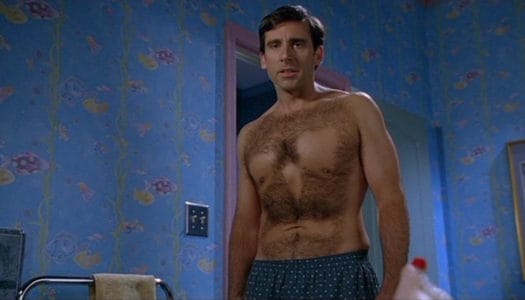 How could you forget The 40-Year-Old Virgin? It’s hard to forget classic lines such as, “You know how when you grab a woman’s breast…it feels like… a bag of sand” or Jane Lynch’s deeply intimate and too much information conversation to Andy about certain body pleasures, rusty trombones, and Cincinnati bowties.  There are a lot of memorable quotes and scenes coming from that film and the raunchy comedy was one of the most popular movies that came out in 2005. The 40-Year-Old-Virgin helped launched the careers of Steve Carrell, Paul Rudd, Seth Rogen, and Elizabeth Banks, and remains one of the defining moments in the early 2000s. However, times have changed, and so has the movie landscape. These days, raunchy comedies aren’t released as much in theaters as it’s mostly about superheroes, remakes, reboots, and sequels. But it’s not just the fact that the world of movies has shifted, it’s that the perspective on the way modern audiences may see films of yesteryear. What may be seen as a classic during its time period could come across as offensive and out-of-touch to modern audiences. So, does The 40-Year-Old Virgin hold up nearly 15 plus years later?

Here’s the thing, The 40-Year-Old Virgin isn’t like American Pie, in which the film follows a bunch of horny teenagers looking to finally lose their virginity. To be clear, I’m not bashing American Pie or films of that nature as I can generally sit down and watch those movies. Being a young male, there is genuine excitement when it comes to wanting to lose your virginity so there’s some truth in the mix of all the raunchiness. However, not every man is the same. It’s actually rare to see men presented as virgins past a certain age, let alone 40. According to the Center for Disease Control and Prevention, the average American loses their virginity around the age of 17. As you can imagine, the percentage decreased as people grow older. 12-14 percent of adults haven’t had any sexual contact by the age of 20. 5 percent for 25-29 and 0.3 percent by the age of 44. So, the portrayal of men and sex isn’t just a movie thing as guys are known to be more sexual beings than women. No, I’m not saying that men will hump anything that walks, but the point continues to highlight the rarity in regard to views on sex. Nicky vomits on Andy. Beth masturbates. David gives us a little slideshow of his butt. The 40-Year-Old Virgin is raunchy, there’s no denying that. But the purpose of the film overall is the value of relationships and how sex is better when you’re in a committed long-term relationship.

Andy’s attempted flings with Nicky, Beth, and any other women don’t particularly workout because he wasn’t able to connect with them on an emotional level. Sure, a lot of it was circumstance, but just as Andy was about to have sex with Beth, he realized that it wasn’t right for him because he loved Trish and wanted to share the special moment with her. It tackles a lot of the anxiety most men go through. The only reason Andy tries to hit as many women as he can because there’s some pressure from the guys to do so. Andy isn’t experienced in the relationship department, so he’s given misguided information on what the guys think he should do. When in reality, women value more than just sex. It’s about gaining the emotional connection first that allows for the physical stuff to be important. I’m not downplaying the importance of sex within a relationship as everyone has their views on what they value most, but the messages conveyed in The 40-Year-Old Virgin is a sex-positive showcase that some men could actually identify with.

However, The 40-Year-Old Virgin isn’t memorable because it highlights a different viewpoint for men when it comes to sex. Generally speaking, it’s a funny movie. Is it a bit long? Yes, and had Judd Apatow cut 20-minutes of the film then it would’ve been perfect. Still, even though the movie is nearly 20 minutes too long, it’s hard to not laugh at nearly every joke is each scene. What helps is the diverse set of characters that aid Andy on his journey to lose his virginity. Even the smaller supporting characters such as Paula and Marla have a couple of good zingers throughout their time in the film. The jokes don’t dictate the story of the film, thus they flow and come naturally. The 40-Year-Old Virgin is ultimately a sweet love story on the importance of sex and long-term relationships, and despite coming out in 2005, the film remains as sharp and timely as ever.