Home
Entertainment
Comics
Did You Know Scrooge McDuck Got His Start in Comic Books? 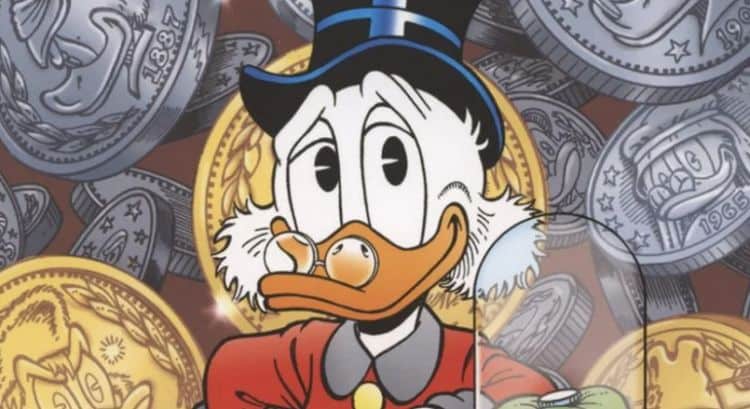 How many of us grew up with this character? Scrooge McDuck has been a part of Disney for longer than a lot of us can recall, but the funny thing is that he didn’t get his start in animation like several other characters. Instead, he appeared back in 1947 in a comic book titled Four Colors, issue #178. Unlike many other Disney characters, he started off on the printed page instead of an animated short, which was pretty typical at the time. But despite all that he kept showing up, and eventually Scrooge became one of the more prominent comic book characters in the Disney stable. Those of us that remember him from older animated shorts, or perhaps one of his best performances in Ducktales will know that his popularity is well-earned despite the fact that he’s old, not entirely spry all the time, and incredibly rich.

When it came to Ducktales he started off as the Scottish miser of the family, someone that Donald knew a bit but his nephews, Huey, Dewey, and Louie didn’t know at all. Scrooge was essentially that odd relative that some of the family knew about but nobody really talked about since he wasn’t a pleasant character when he was first introduced in Ducktales. It’s fair to say that he’s had plenty of moments in the comics when he hasn’t been that great of a person either since a lot of times he’s been all about making his money, keeping his money, and getting more money since he owns a good chunk of Duckburg where he lives. In regards to the cartoon, it took a while to really get to know and like Scrooge since his character was designed to be a belligerent old bachelor that had no use for anything like family, but eventually it was easy to see him as a likable individual since once he opened up his life became a lot more interesting.

From the comics until now, Scrooge McDuck has done a lot of changing, even if he’s been more or less the same person. That sounds a little awkward but the truth of it is that in the comics he was just as hard to get to like for a while for a lot of people for about the same reason. But over the years people have come to realize what he’s all about and it no longer matters if he shows up in a reboot or a continuation, fans know Scrooge for who he really is and what he really cares about. The adventurous and very rich old duck became part of the regular Disney crowd a while ago but has been one of those characters that despite his popularity and frequency in the comics still doesn’t always feel like someone that everyone would know as well as Mickey, Donald, Goofy, and the others that serve as the core group of characters.

Despite his run in the comics and in holiday specials, Scrooge only really attained his heightened status when Ducktales came along since he was a main character and as such had a big part in driving the story since much of the show was about his life in one way or another. From swimming in his money bin (it’s still amazing to think how he does that) to taking his nephews and pilot, Launchpad on another treasure hunt, Scrooge McDuck is like a richer, older version of Indiana Jones, but without the storied love life. There was an episode in which it was revealed that he did have a long-lost love, but she wasn’t all that happy to see him apparently.

Every bit of development that Scrooge has had over the years has come through the comics and been translated to the animated shorts and series that he’s been featured in. It’s fair to say that the comics were able to get him noticed and also managed to get people interested, but it’s likely that the animated series and shorts that he’s been in for so long were what got people hooked on the character after a while since Scrooge is a fun character, but being able to hear him come to life is great since the personality that the character was given over the original series and in the reboot was a lot of fun for the fans. It’s a big hope that this will be one of the many characters that Disney will hold onto for a while, since the fact that he’s a rich adventurer helps to make him interesting, and thinking that he could continue in such a manner even into the future would be intriguing. It might be that at one point Scrooge will have to be set aside or allowed to fade just a bit, but it’s not bound to be soon, since he’s just too much fun.