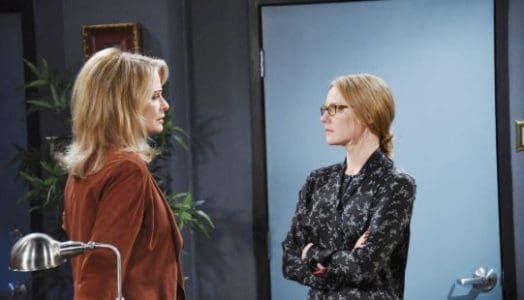 Days of Our Lives fans know that Abigail is going through one of the most difficult times in her life right now, and that’s saying a lot. She’s been through more than we can ever imagine as people in life. She’s been stalked and almost killed, she’s been dead and then come back to life, she’s been hidden away from her family, she’s lost her husband, she’s married a crazy man who tried to kidnap her after she did him a huge favor, and she’s had the same crazy person who has made her life miserable show up at various events in her life more times than necessary.

But it’s hard to be a person who has this kind of life when you’re also dealing with the fact that all the days and weeks you’ve been missing in your mind happen to be because you have two alternative personalities who are trying to overtake your body. She’s just been reunited with her beloved husband, Chad, only to realize that she’s got a person called Gabby who has taken over her mind and done terrible things in addition to a Dr. Laura who has taken over her mind and tried to get it back to her.

And now that she’s learning of this situation, she’s going to be devastated to realize she might not be strong enough to keep these two personalities out of her mind. She’s got so much going on right now, and she’s not sure she can get them out of her brain. She’s going to find that they are back, and Abby is gone again. But perhaps knowing that they are there and trying to take over will help her come back on her own this time. And we also know that Dr. Laura is fighting for her.

These personalities might try to take over her body and her mind, but one of them is trying to do the right thing. We also hear that there is a good chance that the one personality is really doing all she can to say goodbye to the man she loves.