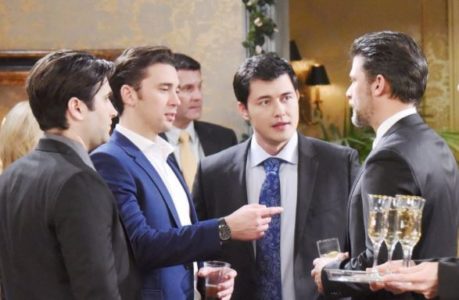 Days of Our Lives fans want to know what might happen to Sonny. Is he going to feel guilty about what happened at the party? He is the reason all his friends were drugged and put in the situation they were in to begin with. He is the one who wanted so badly to take over Titan. He begged and pleaded and did all he could to make it possible to take over, and now he is sitting around with his friends drugged and sick, and he’s wondering if this is all his fault.

Will he regret the decision to take over and take on Deimos as a result? He couldn’t have imagined that Deimos would do something like this — but he always does. He’s managed to find a way to take down the families of everyone who has ever crossed him. That’s something Sonny never took into consideration, and now he might just regret that.

Will he show up to do the job and do it well, or will he allow his guilt to show Victor that perhaps he is not the best man for the job? The thing about Sonny is that he’s a nice person on the inside, and he wants to do what’s right and well with the people he loves the most. Does he have the drastic evil in him that it takes to do what Deimos did, or is this a refreshing change for the business and even for Victor’s desires and wants and needs?