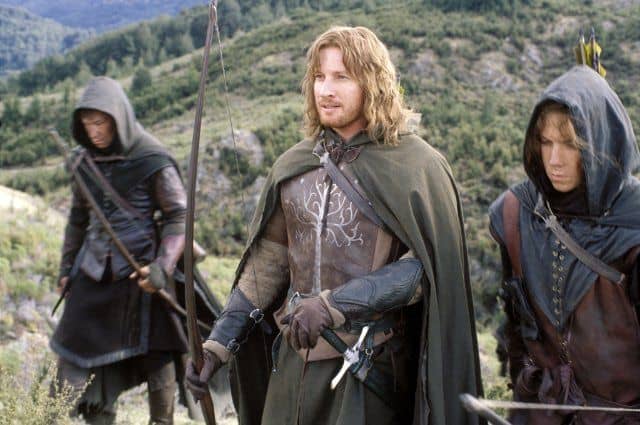 If you don’t know who David Wenham is you might not be into fiction or fantasy since that’s what he’s been known for throughout the years. He’s got one of the best voices in the business and he’s also one of the best actors but doesn’t seem to get lauded enough for it. People will often look and say that they know him from somewhere but at the same time they can’t always place him until they see David in another film or show. Then it clicks and they wonder how they missed him to start with. It’s not too hard since he’s kind of an unassuming guy and doesn’t fly high on the radar all the time. Yet he does manage to land himself in some very big roles in very big movies and TV shows now and again and that alone seems to keep him near the top of the list or at least somewhere comfortably in the upper reaches but not always firmly in the spotlight.

10. He was the narrator for Deadliest Warrior.

He did all the narration for this show and despite what people might have thought it was highly entertaining for the most part. There were obvious discrepancies since up until season three there were individuals and ‘experts’ that knew their weapons and the warriors that wielded them but the fact remains that one on one isn’t the way  lot of these warriors fought.

9. He was in two Lord of the Rings movies.

As Faramir he was in The Two Towers and The Return of the King. He was ordered to go on what amounted to a suicide mission in Return of the King since his father wished that Boromir had survived instead of Faramir. But then his father lamented his passing even though he was still alive.

8. He’s been a bingo caller and an insurance clerk.

Everyone had to start somewhere and despite starting out young there was obviously the need to pay the bills when the acting gig wasn’t working as well. Thankfully his career took off after a while and he didn’t need to go back to insurance or to bingo.

David played a rather devious character in this show and despite not being the main character he was probably one of the best in the entire season since the lead actor was heavily criticized along with the show.

6. He was cast in LOTR since he looks similar to Sean Bean.

There is a resemblance there and David would say it’s because they both have big noses. But in all honesty whoever was in charge of casting did a great job on this selection since the resemblance was great and the acting talent was insanely wonderful.

He seems to fall into roles that use him as the narrator every now and then and he does a good job at it since his voice is perfect for narration and allows him to at least sound like a great storyteller due to its tone and pitch.

4. His long term plans are to direct.

He’s stated that he feels like a director in an actor’s body, which obviously means he wants to sit in the director’s chair and see what it’s like for a while. It could be that he’ll do a good job, but it either hasn’t happened yet or he’s still building up the courage to make it work.

This was kind of a switch from his other roles seeing as how he’s played kind of a tough guy throughout a lot of his acts. In this film he played a friar that was more or less Van Helsing’s assistant and hanger-on. He wasn’t much for courage and he didn’t do much of anything except worry constantly and do a bit of research.

Since he’s the youngest in his family he was always putting on different kinds of shows to entertain himself and his family. He’s had a lot of energy since he was a kid and was allowed to channel that into acting.

Initially it was to get into doing something that could help channel his disruptive energy into something positive. Obviously it stuck with him since here he is today as one of the world’s most well-known actors and a very accomplished one at that.

David Wenham is one of those guys you look at and think that he’s completely approachable and could be very fun to talk to. In fact he’s probably one of the most friendly-looking individuals in Hollywood and sounds like a rather pleasant person that enjoys what he does.