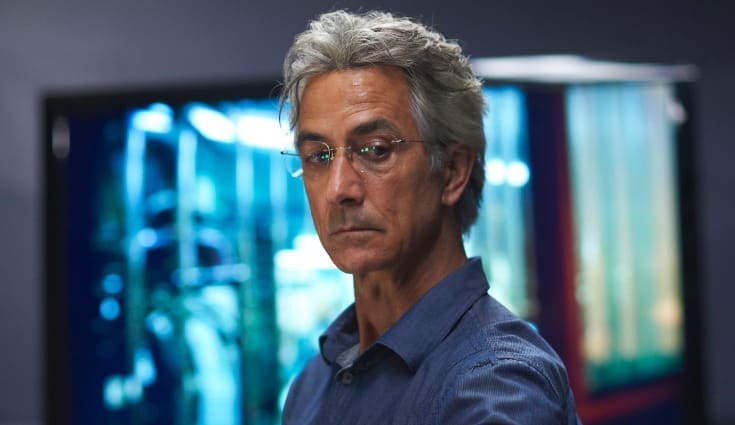 David Strathairn looks like a very severe character at times and he can come off as one quite easily since he does have the kind of look that suggest that of a bad guy, kind of weasel-like, fierce when he needs to be, and otherwise a bit diabolical. But he’s played several roles throughout his career that have also been kind of heroic in a way and inspiring. As one of the many actors that people tend to point out when they actually see him David is among those that is a supporting actor more often than not and is also someone that makes the movie a little more complete thanks to the characters he plays. In some ways his characters are replaceable at times but in others taking them out would tend to ruin the whole dynamic in a way that’s hard to get back. In other words he’s the kind of linchpin that’s needed to cap off a successful show or movie now and again.

Here are a few things you might not have known about David.

10. He was in Dolores Claiborne.

In the book things were a bit different but in the movie it can’t possibly be denied that Joe was the villain no matter how much Dolores was made out to be in the wrong initially. She put up with so much throughout the movie that one had to wonder when he was finally going to see his comeuppance. When he did though it was almost a conflicted moment that left people wondering how to feel.

9. He worked as a clown in a traveling circus.

He’s kind of a difficult person to see as a clown since it seems as though he’s always looking serious in some way, even when he’s happy or excited. Many wouldn’t be likely to believe that he was ever a clown but it is true and he did put in his time.

8. He was in the Bourne Ultimatum.

It was kind of difficult to find an adequate foil for Jason Bourne and Noah Vosen still wasn’t quite it since he couldn’t keep up with Bourne any easier than the others before him had. If the same people that created the guy’s persona couldn’t catch him, how is one guy that can barely keep his own house in order going to do so? He’s ruthless and vindictive enough, he just doesn’t think outside of the box enough.

7. He is a character actor.

This is a just a very simple way to say that he plays roles that aren’t leads and is usually a supporting cast member that is there to help the leads. In this capacity however he does very well and has thrived in many movies and shows.

Playing the role of Edward R. Murrow, David goes on to show the world just what was going on during the 1950s during a time when Communism in America was something that just about anyone could be accused of and paranoia was rampant among the nation. This showcased the struggle between Murrow and Senator Joseph McCarthy in a battle of wills that no one could really say they came out of unscathed.

It’d be interesting to run a poll and find out just how many actors in Hollywood have either started out or found themselves in the theater during their career. It might surprise a lot of people to note that a good number of actors have started out there.

4. He was also in the film Sneakers.

This film was entertaining largely because it had a cast of favored actors that had either at one time been a big hit or were still in their prime. As a blind man that can deduce just about anything by sound David managed to be very convincing in this role.

Like a lot of people he’s been around for a good long while and has managed to find roles in TV and in film aplenty. A lot of his roles have seen him as a very serious character since it seems as though this is his comfort zone when it comes to acting.

2. He starred in Alphas.

Alphas seemed like a show that was primed and ready to go, but it only managed to last two seasons before it went off the air. The show was about individuals called Alphas that possessed superhuman abilities and were used to stop crimes in a very conventional way, but it just didn’t seem to catch on with enough viewers.

1. He’s had to smoke for a role despite being a firm non-smoker.

For his role as Edward Murrow he had to smoke pretty constantly, but thankfully the amount of tobacco in the cigarettes was reduced.

He’s an interesting actor to watch, especially when he takes on a role that’s outside of his comfort zone.

Why Independence Day: Resurgence Bombed At The Box Office

Why Countdown Was Mostly Ignored By Audiences