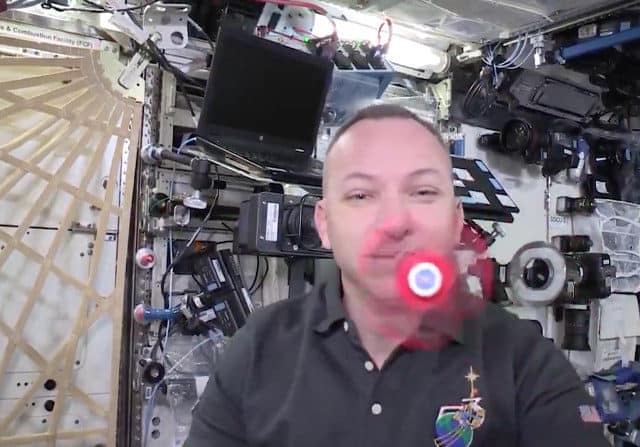 How likely is it that you more people want to try this now? You’ve got to admit that a fidget spinner, which is loved by some and looked at as a ridiculous invention by others, does look kind of cool when it’s allowed to spin and hover at the same time. In zero gravity it would be fairly easy to just let it keep spinning since the only thing that it’s working against is the friction created when it spins. It might be quite a sight really but the main question is, will it keep on spinning if you didn’t mess with it? From the video it seems fairly obvious that the answer is yes, but of course we don’t get to see the whole thing. Also, if it has any momentum and bumps into something obviously it’s force is spent and it will stop.

The fidget spinner is a toy that was devised, or rather finalized, just this year and has become another trend that is for the most part tolerated by many and loved by others. What it is really is a ball bearing that sits in the center of a flat, multi-lobed surface. It’s intent is to spin on its axis with ease and be used to relieve stress. The trick is that those that suffer from high stress, ADHD, or other such disorders could possibly use this to alleviate the stress through a type of meditation that is brought on by the spinner. The only problem is that there really isn’t any scientific proof that they do anything other than spin and look cool when they’re at rest. In essence they’re just another trendy little toy that has no real practical value but to collect dust on a shelf when no one wants them.

If you’ve gone to a toy store or a novelty store or even a department store recently you’ve probably seen an entire shelf devoted to these things. They come in various colors, sizes, and in some cases feature logos and pictures of favorite pop culture icons to make them a little more appealing to people. Overall though they’re essentially useless and not that practical. They can offer a bit of amusement and even keep people occupied for a short amount of time, but when all they do is spin it’s kind of hard to get excited about them in a way that suggests relief from a stress disorder.

Also, the desire to misuse them, just like with anything, has been seen to take a horrible turn once or twice. Accidents that have taken place with fidget spinners have commonly been the cause of people acting incredibly stupid with them and then claiming that the spinner was at fault. A good example is the man that decided using a can of compressed air to speed up the fidget spinner was a good idea, only to have a piece of it break off and strike his son in the lip, wounding him badly enough that he needed stitches.

At least in space you can keep it spinning and just nudge it now and again, you don’t need to resort to stupidity to get your kicks.

A fidget spinner in space! How long does it spin? I'm not sure, but it’s a great way to experiment with Newton’s laws of motion! pic.twitter.com/5xIJDs2544