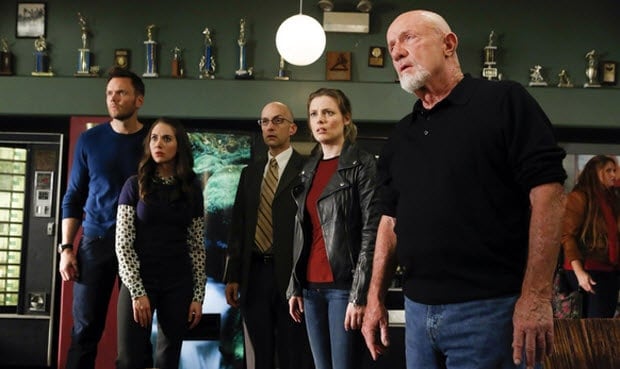 The end is near my friends. And by the end, I mean that the most recent Community episode is part 1 of the season (yes, season, implying there WILL be another. See here for why. Continue chanting “six seasons and a movie” as we continue, please) finale. Since Community is perpetually on the bubble, we fans have to get used to the finales being emotional. This first half was a great one! Let’s proceed, shall we?

Present day at Greendale Community College, everything is going well. Maybe a little too well for our usually problem-solving gang. The “Save Greendale” committee has fixed many problems plaguing the school. So instead of their usual committee meeting, they play games on their phones in the study room. Abed is unsettled by the peace that has overtaken everyone (shocker) and soon the Dean is visited by his bosses (the board) who warn him that an insurance appraiser is coming to Greendale.

The insurance appraiser, Ronald Mohammed (bring on the jokes, he’s heard them all), says a lot of silly things and then appraises the school. Apparently, the committee has done TOO good a job, because the school now has value! So of course, the board decides to…sell it to Subway (Those jerks now own Greendale AND the Buy More)!! So after some somber reflection, one more betrayal, the dean weeping in his office (brilliant, just brilliant), and an unexpected proposal of marriage: The Dean, Abed, and Annie may have come up with a way to Save Greendale for real…unless Chang has something to say about it. Also (totally unrelated), Duncan and Hickey may have a family connection.

This episode had no high concept, and yet everything that makes Community great was there. Of course I say in every post how much I love that Dan Harmon is back. Well, I do. He’s amazing. I really hope he gets another go-round with the crew before the show says farewell. This far in, the fans deserve a real finale. Tonight’s episode was a beautiful reminder of Community’s most basic, simple format, yet it still works brilliantly. This episode went back to its roots and had call-backs to even the first episode. Only Harmon could pull that off.

I can’t say enough about Jim Rash as Dean Pelton. Not only is Rash a fantastic writing talent (Rent The Descendants if you haven’t seen it), but he REALLY commits to everything he does. When the board and the new ownership found him sobbing in his office in his underpants, it lasted all of two seconds, but I laughed the hardest I’d laughed all night. Just perfect.

There are so many things I could say but I’ll keep them for part two of the (SEASON) finale next week. Don’t worry! I’m sure that Abed, Annie, and Dean Pelton will get everyone (except Chang) to help them and in turn save Greendale once and for (at least a sixth season) all! Before I go, here are some of my favorite quotes from the episode.

“I love scotch. And myself. I tolerate Greendale.”- Jeff

“This inspection is going to be the most boring thing to happen to this school since Britta dated Troy.”- Jeff

“If I come over there, there are going to be two sounds: Me hitting you, twice!”- Hickey

“…Save Greendale committee. The committee that did its darnedest”- Jeff

Well that’s it for this week everyone. See you for one more round of Season 5 next week! In case I don’t see ya: Good Afternoon, Good Evening, and Six Seasons and a Movie!!