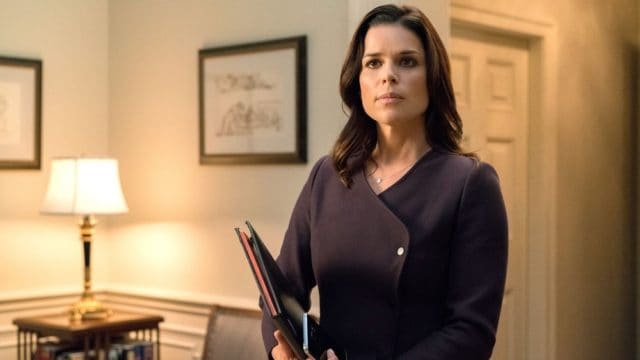 Did I not make this call a few months ago?  Back in April I said that Neve Campbell has been sneaking up on us.   Ever since Neve Campbell has been on the show House of Cards she’s beginning to return to serious relevance in movies.  The last time Campbell was a major player in movies was back in her Scream and Wild Things days.   For those counting those were around 20 years ago.  Sure she made sequels and all that but she wasn’t nearly as big a movie star as back in the MTV days.

But Campbell has been wowing producers as a mid 40s fireball on House of Cards and she’s just landed one of her biggest roles in a very long time, if not ever.  The actress has landed a role in Dwayne Johnson’s upcoming new action thriller Skyscraper and this may actually be the biggest budget film production she’s ever been a part of. According to Deadline:

Johnson stars as a former FBI Hostage Rescue Team leader and war veteran who now assesses security for skyscrapers. On assignment in China he finds the tallest, safest building in the world suddenly ablaze, and he’s been framed for it. A wanted man on the run, he must find those responsible, clear his name and somehow rescue his family who are trapped inside the building above the fire line.

We’re not 100% sure who Campbell is playing in the movie but starring alongside “The Rock” is about as big as you can possibly get on the big screen these days.