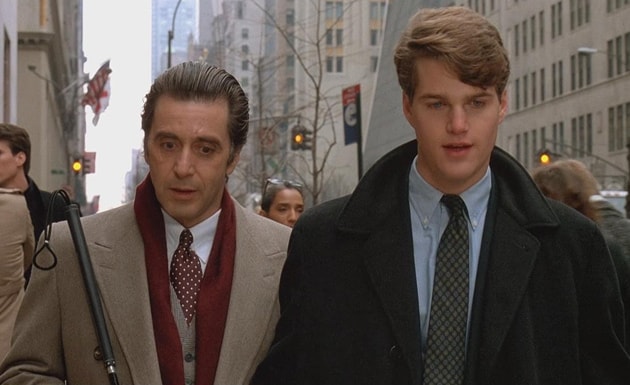 Some actors shine brightly and then fade into obscurity, while others go largely unknown for years and then become an instant hit due to one film. Chris O’Donnell is one of those rare actors that shows flashes of greatness but then disappears for a while, almost treating Hollywood like a part time job. There is no doubt however that when he is on point his acting chops are revealed to the fullest. It is also well known that he can either stand with the best or at the very least play the supporting role without any trouble at all. Despite his move from the big screen to television his acting style has carried him through the transition without a hitch. While on the big screen though he put up the notable roles that are listed below.

The one role that O’Donnell always seems to play in many of his films is the standup guy that doesn’t back down in the face of pressure. As Reece he staunchly defends his roommate David Greene, who is played by Brendan Frasier. Set in a time when antisemitism was still a big issue within school settings this film shows Reece as one of the few people that bother to look at people for who they really are, not what race they belong to.

Once again playing an idealist, O’Donnell delivered a spot-on performance no matter that he was surrounded by an all-star cast in Keifer Sutherland, Charlie Sheen, Oliver Platt, and the legendary Tim Curry. Despite this being a Disney movie and having much of the mayhem dialed down to a comical level, this film showed that O’Donnell can be playful as well as serious in his given roles.

Idealism seems to be O’Donnell’s stock and trade in his roles. Just like everyone he has a niche, and as Adam Cayhall he is attempting to show this by reuniting with a racist grandfather on death row played by Gene Hackman. O’Donnell gives a very powerful performance as Cayhall, seeking to put to rest the shame of having a grandfather in the KKK while still seeking to keep his life on the straight and narrow.

This role was more heartbreaking than most, as it involved the tough choice of allowing everyone he knew to die or sacrificing one person so that majority could live. As Garrett, O’Donnell got a chance to work with the late, great Bill Paxton and Scott Glenn, who didn’t so much override his performance as they did enhance it. While he was a little flat at times in this role, his emotions and feeling still came through in the quiet moments when the dialogue took over.

1. Charlie Simms – The Scent of a Woman

It’s not everyone that can stand their ground with an actor as passionate as Al Pacino. The man simply blends into whatever role he takes on, and his costars often have to hang on for the ride. O’Donnell does more than this however, as he puts forth a performance unlike many that he’s done since. While some might see poor Charlie as outmatched and overwhelmed, his meek character is a perfect match to Pacino, and stands as one of O’Donnell’s best characters.

Whether an actor comes from TV to the big screen or goes the opposite way all that matters is that they are memorable. Fans don’t often pay attention to a star for more than a few breaths if they phone in a performance. As a movie or television star Chris O’Donnell isn’t about to be forgotten.