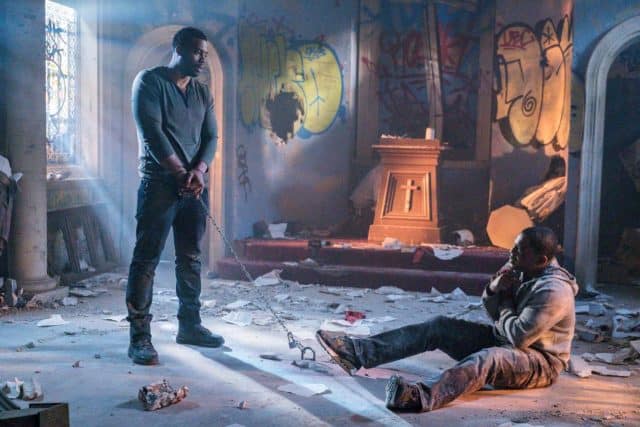 Oh Mekhi Phifer, it is so nice to see you on NBC again. I know we’ve seen him on a season here and there of various shows, but the ER alum finally came to his first home network. Though it was just for one episode, it was a heck of a performance. Not only that, but this particular hour of Chicago P.D. was an ER reunion of sorts, since the episode’s director Eriq La Salle is a member of the original cast. I’ll stop with the history lesson now. Point being, if you noticed a heightened level of emotion in the intricacies of the way “Captive” played out, it’s because everyone brought their A-game this week. We didn’t see the biggest firefights, or the most menacing humans, or even the most emotional moments Intelligence has ever had. What this hour of Chicago P.D. was about was a delicate dance of emotions right on the surface, and the moment they were released, you could cut the tension with a knife.

The episode starts off cheery enough. What could be more fun than Trudy Platt on karoke? But Atwater doesn’t make it to the party. A simple errand takes a dangerous turn when he is kidnapped and taken hostage. The only thing Atwater has going for him is that his captors don’t know he is a cop. Atwater ends up in this situation because he was checking on a man named Joe Baker, a former dealer whose son Atwater killed. The son wanted to follow the father into the family business, and ended up killing a convenience store clerk. Joe is in deep denial about how far his son fell. In his eyes, Atwater was just another cop who killed a black kid. It was ruled a clean shot, but the city still shelled out a nice chunk of change for Joe. This is all more than enough for Joe to hate Atwater.

Joe was kidnapped because some former associates thought that he took their drugs. Atwater was just in the wrong place at the wrong time. As it turns out, after Joe was paroled, he went straight. He’s been working honestly. A work friend looking to make a quick buck is the thief. No matter how much Joe and Atwater plead their innocence, nothing works. The guys just want what they feel they’re owed, and they’ll take it in blood if they have to. Joe is shot while Atwater takes a drill to the leg to save Joe from further harm. Atwater is able to get a message to Intelligence, but it becomes painfully clear that they won’t make it in time.

Ruzek has been in the dog house with Voight for awhile, but the guy isn’t some rat who turn on his team willy-nilly. Ruzek becomes despondent when Dawson is forced to kill their only lead to Atwater’s location. In that moment, the tide turns. I swear you could actually see it turn with Ruzek’s usually sarcastic emotion dialed down to a raw cry.

Both Joe and Atwater cover bleeding body parts, but they have plenty of fighting energy. Joe uses all his energy to hate Atwater, pulling all his strength to say “You know how many times I’ve thought about killing you?”, then recounting the ways. Atwater is just trying to keep them both alive long enough to be found. A relationship built on resentment and guilt has to be tempered in order for them both to stay alive. The one thing that convinces Joe of Atwater’s innocence, just as Joe is pulls a trembling gun on Atwater’s temple, is hearing his son’s final words. Joe immediately recognizes the phrase “I don’t get on my knees for no man.” He taught those words to his son, and they’re the words that got him killed. That’s a terrible burden there.

Apart from Mekhi Phifer’s always incredible work, there was a specific intricacy to this episode. From Ruzek’s barely suppressed fear, to Atwater’s apology to Platt for missing her birthday, and of course, Phifer’s despair at realizing how he failed his son. “Captive” was an understated, yet powerful hour of Chicago P.D.

Chicago P.D. raised the stakes in an episode that found its power in understated emotion and guest star Mekhi Phifer.