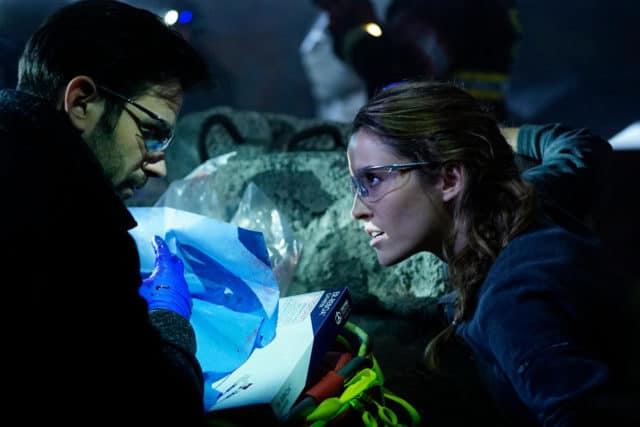 Occasionally, a series has what can be referred to as, “transition episodes”. These are episodes that don’t necessarily feed too much into the character’s stories or have big, dramatic moments. What they do is to push past the stories of week’s past to get ready for a the changes ahead. This week’s episode of Chicago Med is just one of those episodes. Whether it’s family drama, a dead relationship, or a terrible professional mistake, everybody needs to let go of the things they can’t change.

Dr. Rhodes has every intention of following Robyn to Minneapolis, but a bridge collapse derails his plans. Instead, he and Dr. Bekker have to go into the field to save a man trapped under concrete. Instead of preparing to win back his girlfriend, Dr. Rhodes has to build up a lot of trust with Bekker in a short amount of time. Rhodes has to perform two risky procedures on his patient, including an amputation, and he has to do it with Bekker’s medical and emotional support. If she didn’t back him, not only would the patient have died, Rhodes could have been questioned about performing a cardiac procedure in the field. Rhodes and Bekker might not like each other, but at least they’re learning to trust each other’s abilities. Things are changing, whether Rhodes wants them to or not. Robyn left, and he has to accept that his place is away from her. He can fight it tooth and nail, or he can embrace it. I’m not sure where buying an expensive convertible (in the middle of winter) fits into his plan, but we’ll go with it.

A baby born to a drug-addicted mother has everyone’s protective nature coming out. The only reason to let the baby near the mother would be to improve the baby’s condition. Detox for infants is horrific because they lose the time they need to build up their immune system fighting for their lives. In this case, the situation is exacerbated by a need for skin-on-skin contact. It takes a lot to convince the mother to get up and hold her child, but she does. She does help her baby, but the infant needs so much more support than that one moment can bring. She helped him, but first she hurt him. There’s no guarantee she wouldn’t do that again. There is also no guarantee that she will do better without her child. Dr. Choi felt very strongly that the baby shouldn’t be allowed anywhere near the baby, but for a very different, personal reason. There is still a lot we don’t know about Choi’s family history. April doesn’t even know that much. Eventually, he feels comfortable enough to tell her that he has an adopted sister who he hasn’t talked to in four years because she has a lot of issues, presumably drugs and running with the wrong crowds. It explains a lot about Choi’s attitude towards addicts, particularly ones who have more choices.

Barry the paramedic is trying very, very hard to get Maggie to go out with him. The problem is that she can not trust him. Once a person cheats, it’s hard to get that trust back. Case in point, Ms. Goodwin and her husband. Goodwin’s ex-husband Burt returns to the hospital with his girlfriend. Recall that his girlfriend was diagnosed with cerebral palsy, and by the looks of things, her condition is deteriorating quickly. In any other circumstance, this situation would be really dumb. The first thing that goes through your mind would probably be that this woman has a lot of nerve to ask her boyfriend’s ex-wife to look after him. But she is dying, so she has to at least ask. Ms. Goodwin can keep Burt calm, but that’s as far as she can go, even when the woman does die. People say death puts uncomfortable situations into perspective, but so does life experience. Sometimes asking to forgive and forget is too much to ask.

Then there are times you have to learn to forgive yourself. Reese recognizes that she made a big mistake attacking a patient. Feeling responsible for Reese’s situation, Dr. Charles assigns Reese to shadow one of his colleagues for the remainder of her suspension. Reese isn’t a fan of her new supervisor’s more regimented approach to psychiatry. But if Dr. Charles can’t forgive himself, Reese is stuck. Luckily, after his experience with the drug-addict and her baby, Dr. Charles changes his mind. He needs a good student as much as Reese needs her teacher.

All in all, not bad for what can be called a “transition episode”.

Everyone has to learn to let go, but there are some circumstances that Chicago Med can’t separate that siutaion.