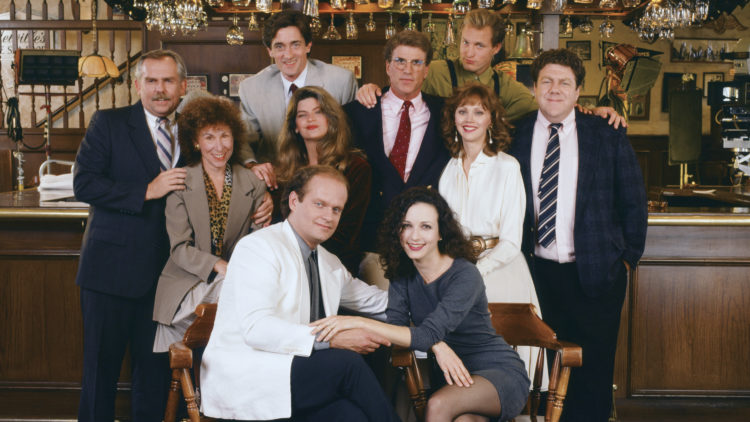 Over the course of a show’s life a few things might change here and there, peripheral and supporting characters might come and go, but so long as the core group of characters are kept then there’s really nothing to say about the show other than its development. Cheers however is one show that never lost a step throughout a single season. Throughout 11 seasons it was the same show more or less with only a few changes in the lineup that had any sort of impact on the show. And really, that impact was a positive thing unlike several other shows that will be mentioned below. If you remember, Coach was one of the greatest characters to ever grace the screen with his presence, while we also saw Diane disappear to be replaced with Rebecca. Lilith came and went, as did a couple of other characters. Eventually Woody came on the scene, and Frasier was a regular that showed up when it was necessary.

Cheers was the one constant among most, if not all, sitcoms.

As time went on this show changed as it needed to, keeping with the times as much as possible and changing its lineup just enough to keep things interesting. The show was one of those that was talked about the most in crowds and thanks to keeping its core group, meaning Sam, Carla, Cliff, Norm, Coach, Frasier, and a few others such as Woody, it managed to keep people happy and entertained for a long, long time. That’s one of the secrets after all, keeping the people that the fans really want to see. Diane was a favorite of a lot of people, but Rebecca had a fan base that was awfully close to Diane’s and she was just as effective on the show as Diane ever was. But taking anyone else out would have absolutely wrecked the dynamic as the others weren’t all the interchangeable. Losing Coach when he passed away in the mid-80’s was almost a death knell in the eyes of some people, but the show soldiered on through the loss and still made people laugh. It was just one of those shows that you couldn’t help but like even if you couldn’t figure out why.

The Fresh Prince of Bel-Air was a close second to Cheers.

Quite honestly when you look at it the Fresh Prince of Bel-Air was just as awesome of a show as Cheers except for one thing: they switched a core character. Aunt Vivian’s sudden re-casting was a big change that rubbed a lot of fans the wrong way and made a great deal of confusion. When trading Janet Hubert for Daphne Maxwell Reid it wasn’t a harmless little switch that had a good explanation. This was Aunt Vivian after all, a character that had been around since the start of the show and had no reasonable replacement as Diane and Rebecca did in Cheers. Fans were basically expected to just accept this change without any other recourse since the show let go of Hubert and brought in Reid. Now a lot of people forgave the show, but the switch was just too much to deal with since it affected the main group and therefore was kind of a betrayal of the fans’ trust. The show continued to do well for a while, but when it was time to sign off for the last time there were still some that weren’t too sorry to see the show go.

Let me amend that a bit. The original show wasn’t the worst, but it was in fact plagued by so many problems with its stars over the years that it became something of a running joke since the fate of the show started revealing itself when the stars went a little nutty and started misbehaving. At one point though the original show was extremely popular and had young women swooning and guys just about drooling. But then they went and tried to bring it back and things just kind of went off the rails. They were trying to get the same magic that they’d captured, kind of, with the first show to come back and it just didn’t happen. People had moved on and moved well away from the 90210 franchise, deciding that it wasn’t quite worth the time to get back into after so long. The generation that enjoyed the original show was perhaps thought to be the saving grace for the reboot, but it really didn’t help that the same generation that had made the show had shifted interests. Plus the idea of bringing a couple of the original stars back and not getting them all really didn’t help boost the ratings.

So honestly if you want to look at it, Cheers is one of the only shows on TV that has ever gone for more than a few seasons and been loved the entire time, with only minimal changes to the cast.